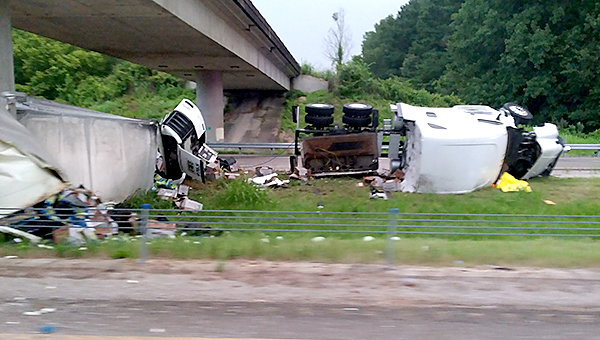 The driver of this 18-wheeler was killed Monday morning when the truck they were driving hit an overpass, flipped and came to rest in the median. The cause of the accident remains under investigation. (Donta Goodman | For The Vicksburg Post)

BOLTON — A 57-year-old Jackson man died Monday from injuries he received when the 18-wheeler he was driving left Interstate 20 near Bolton and struck a bridge support.

Sumler, the lone occupant of the vehicle, was ejected. He was carrying produce.

Fatigue is believed to have been a factor in the wreck.

A second crash occurred when a motorist stopped to assist the first wreck and his Dodge pickup was struck by a Chevrolet S-10. The driver of the Dodge was not transported and the driver of the S-10 was transported to a nearby hospital with unknown injuries. Neither driver in the second wreck was identified.