Flaggs: City will back development of McAllister museum 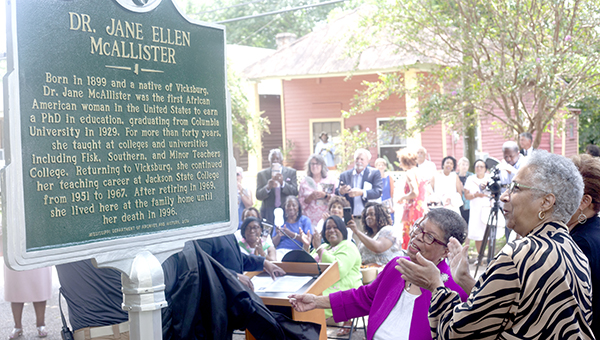 Mayor George Flaggs Jr. put the city of Vicksburg behind a plan to turn Dr. Jane McAllister’s home into a museum.

He announced the plan Saturday during a ceremony marking the dedication of a state marker at McAllister’s home on Main Street.

Flaggs asked the family members to allow the city to convert the house into a museum.

McAllister, he said, was due the honor of having a marker placed at her home, adding, “I believe that Vicksburg, Mississippi will be better than ever before because of this day.”

“Dreamers dream with his eyes closed and a visionary dreams with his eyes open,” Flaggs said. “This phenomenal lady did both, and because of that, we mark this hallowed ground.”

He went further, challenging the family to begin working on developing the museum, with the full backing of the city.

“I’d like to challenge this family (McAllister’s), and the friends, anybody who has a connection with that — the heirs and the property owner of this property — please, to allow us to make this (house) a museum, and the city of Vicksburg will afford all the costs,” Flaggs said. “The children of the future need to be able to walk by this home and this site, and be able to go in the doors of opportunity and see and be able to witness the legacy of a lady that was born 120 years ago and got a Ph.D. 90 years ago.”