PCA picks up the pace on offense 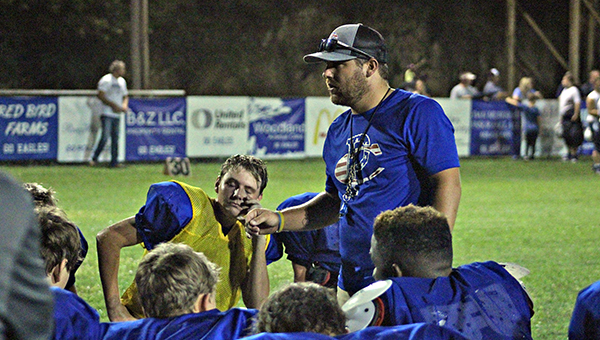 Porter’s Chapel Academy’s offense struggled, to put it kindly, last season. It scored a total of 125 points, with nearly half of those coming in two games.

So, even though it was a small sample size in a controlled environment, the Eagles were more than happy to see a spike in production in their first live action of 2019.

PCA scored three times, including a 60-yard touchdown pass from Luke Yocum to Michael Tod Andrews, in a scrimmage against Clinton Christian on Friday night. Clinton Christian still “won” the scrimmage — the unofficial final score was 30-18 — but PCA coach Blake Purvis was encouraged by his team’s performance.

“Having some bright spots early in the year is definitely something good,” Purvis said. “I think there were more opportunities there. We definitely left some opportunities on the field. We missed a couple of throws that could have been positive plays and potentially big plays in the passing game. With the first live action for running backs I thought we may have missed a hole or two there. There are some positives to build off of.”

In addition to the long touchdown pass, Ricky Carraway and Tyler Washington each had a 10-yard TD run for PCA. The teams alternated 10-play series starting from their own 40-yard line.

Besides the plays that did work, Purvis said there were a handful that looked good until bad snaps blew them up. Several snaps sailed over Yocum’s head.

“I thought we had some opportunities on some plays early where we snap the ball over the quarterback’s head and don’t get to see the play develop,” Purvis said. “Outside of that, we just have to be in better shape. We’re rotating 14 or 15 guys, for the most part, and five linemen. We’ve just got to get more conditioned and try to hold up for a full game.”

Conditioning will also be a key for the Eagles’ defense — all of whom play, to some extent, on offense. There are only 21 players on the roster and the biggest is 215-pound senior lineman Austin Rudd.

Purvis is well aware bigger, more physical teams will give PCA problems. He was happy, however, that they were able to limit big plays and make Clinton Christian work for what it got.

“We’re going to play against teams all year that are bigger than us up front. It is going to be hard to slow the run game down when you’re outsized on the front line,” Purvis said. “But I thought, for the most part, we made tackles in the secondary pretty well and stopped a 10-yard run from being a 40-yard touchdown. In that aspect, I was pleased to see that they didn’t run through us every time they snapped the ball.”

The scrimmage was PCA’s lone preseason dress rehearsal. It will open the season a week ahead of its peers, this Friday at home against Benton Academy.

It’s a different setup than usual, and a challenge that Purvis said has adjusted his approach to preseason preparation.

“It is what it is,” Purvis said. “We tried to treat this to as close to a real scenario as possible. Treat it like a real game and hope that it’ll carry over to next week. It’s going to be a long week of practice. I hope we make the necessary adjustments we need to make.”