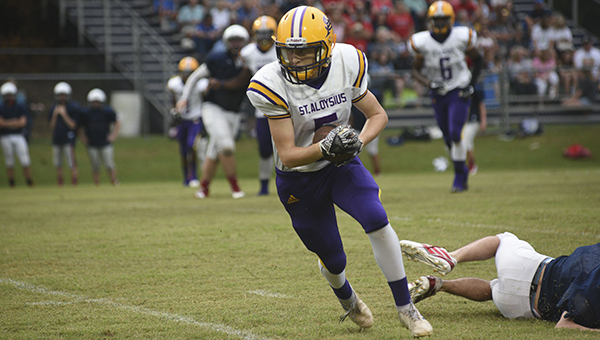 St. Aloysius' Reed Bourne (5) looks to run up the field after making a short reception against Amite School Center during a preseason scrimmage on Friday. (Courtland Wells/The Vicksburg Post)

There were a handful of opportunities that, in a different setting, would have left the St. Aloysius Flashes kicking themselves.

Several dropped passes. One or two long touchdown passes that were there for the taking, but overthrown. A high snap that sailed over the quarterback’s head.
With two weeks left to iron out the kinks, however, those were merely teachable moments.

The Flashes scored twice, forced three turnovers, and allowed less than 100 yards in an 80-play scrimmage Friday night against Amite School Center and Brookhaven Academy. It was a solid debut for the 2019 squad, in its first checkpoint on the way to the season opener Aug. 23 against Hartfield Academy.

“I was pretty well pleased with what I saw, except when we get a chance to make big plays we’ve got to make them,” St. Al coach Michael Fields said. “When you want to perfect things and be a championship team, you want to make plays and not excuses.”

Each team ran 20 plays — two sets of 10, starting at the 45-yard line and with no first downs or clock — against the others in the scrimmage at Balzli Field. St. Al’s best showing was against Amite, when it scored on both of its possessions and racked up 97 yards.

Quarterback Phillip Upshaw was 4-of-7 passing for 20 yards and added nine rushing yards. Upshaw scored on a 1-yard run on St. Al’s first set of plays, and backup Kieran Theriot ran 21 yards for a touchdown on the second set.

Adam Francisco also had 38 rushing yards on only four carries.

Fields said he was especially pleased with how his team handled the hot, humid conditions. The scrimmage was delayed more than an hour because of an early-evening thunderstorm, and the swampy air quickly returned after the storm was gone.

“We did exactly what we were supposed to do. We were the dominant team and we played dominant,” Fields said. “We wore them down, even in that short time.”

St. Al’s defense was, indeed, dominant throughout the scrimmage. Amite gained only 46 yards and neither it nor Brookhaven Academy scored a touchdown. The only points St. Al allowed were on two long, uncontested field goals by Brookhaven kicker Corey Case.

St. Al defensive back James Davis had an interception against Brookhaven and Theriot had one against Amite. The Flashes also recovered a fumble on the first play against Amite.
Despite some misfires in the passing game — three passes were dropped and two others were overthrown to wide open receivers deep down the field — they walked away happy.

“The scrimmage gets the jitters out. Next week we should pick up the intensity, and going on the road we’ll find that fire,” Fields said.

St. Al will have its final dress rehearsal Saturday, when it goes to a preseason jamboree at the University of Louisiana-Monroe. The Flashes will play River Oaks and Glenbrook beginning at 5 p.m.

Fields said traveling for the jamboree is good practice on a lot of fronts, from ironing out on-the-field kinks to going through the preparation for a road game. After the opener at home against Hartfield on Aug. 23, three of the next four games are on the road.

“It’s a practice run. You get a chance to filter in some different things. From the bus drivers to the parents, to the trainers, everybody gets in their routine and gets ready for the real deal,” Fields said.

PCA picks up the pace on offense