Lights of Hope an emotional time for Carter 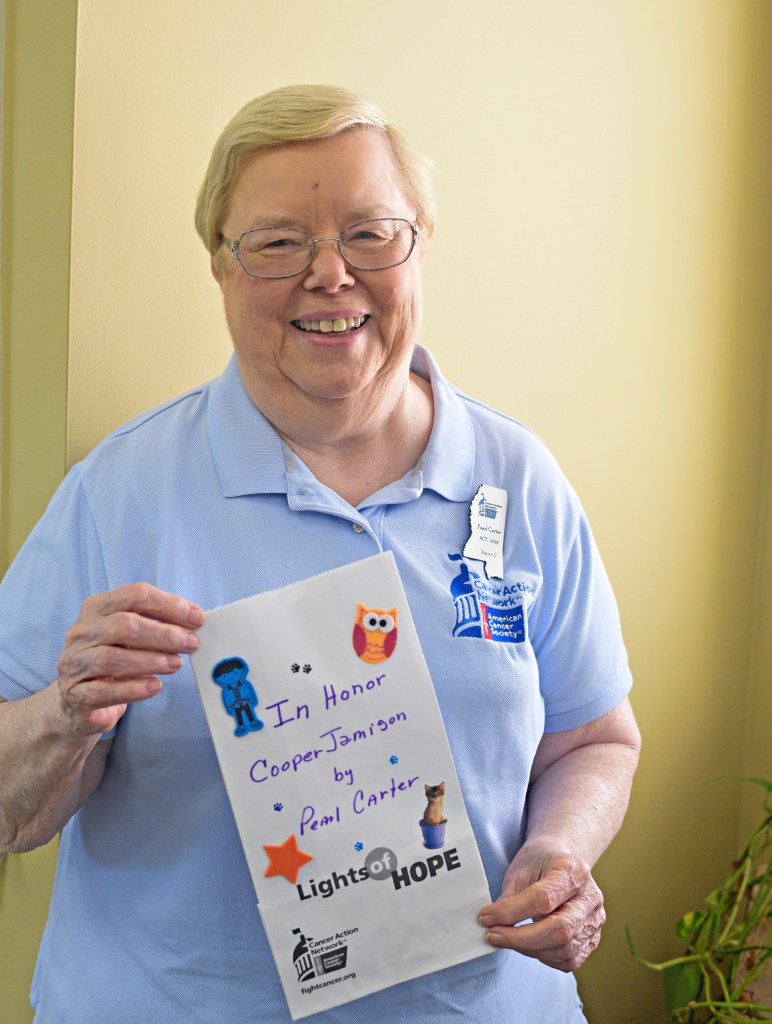 Pearl Carter poses for a photo Tuesday at West Central Mississippi United Way with the Lights of Hope bag she made for a cancer patient. The bag will be placed in front of the Lincoln Memorial in Washington, D.C., at the annual Lights of Hope event in September. (Courtland Wells/The Vicksburg Post)

Last year, more than 23,000 Lights of Hope bags were placed around the reflecting pool in front of the Lincoln Memorial in Washington, D.C. to represent those who had either lost the
battle with cancer or have been afflicted with the disease. Vicksburg resident Pearl Carter, a cancer survivor who attended the event, said witnessing the ceremony was “indescribable.”

“As a four diagnoses cancer survivor, this ceremony is always very emotional for me,” said Carter, who has made the trek to Washington each year since 2006. “And so many of my family and friends have also had to deal with this devastating disease.”

This year’s Lights of Hope ceremony is scheduled for Sept. 10. Carter, who is also a volunteer for the American Cancer Society Cancer Action Network, will once again be in attendance.

In an effort to give locals an opportunity to decorate a bag that she can take with her to the Nation’s Capital, Carter will be holding a LOH decorating event from 2 to 5 p.m. Saturday, Aug. 24, at Porters Chapel United Methodist Church, 200 Porters Chapel Road.

The Lights of Hope decorating event will also act as a fundraiser for the American Cancer Society, Carter said. To honor someone with a light, the cost is $10. For those who would like to decorate
a bag, the cost is $12 if one brings their own supplies and $14 for the use of supplies available.

“You can make the bags as simple or elaborate as you wish,” Carter said adding the bags can even include a picture of the person to be honored or memorialized. However, Carter said, the picture
should be no larger than 2 inches by 2 inches.

“We hope you will have so much fun decorating your bag(s) you will want to help decorate those for others who have contributed but are unable to attend,” Carter said.

An RSVP to the Lights of Hope decorating event is suggested by emailing Carter at pwcarter55@att.net.