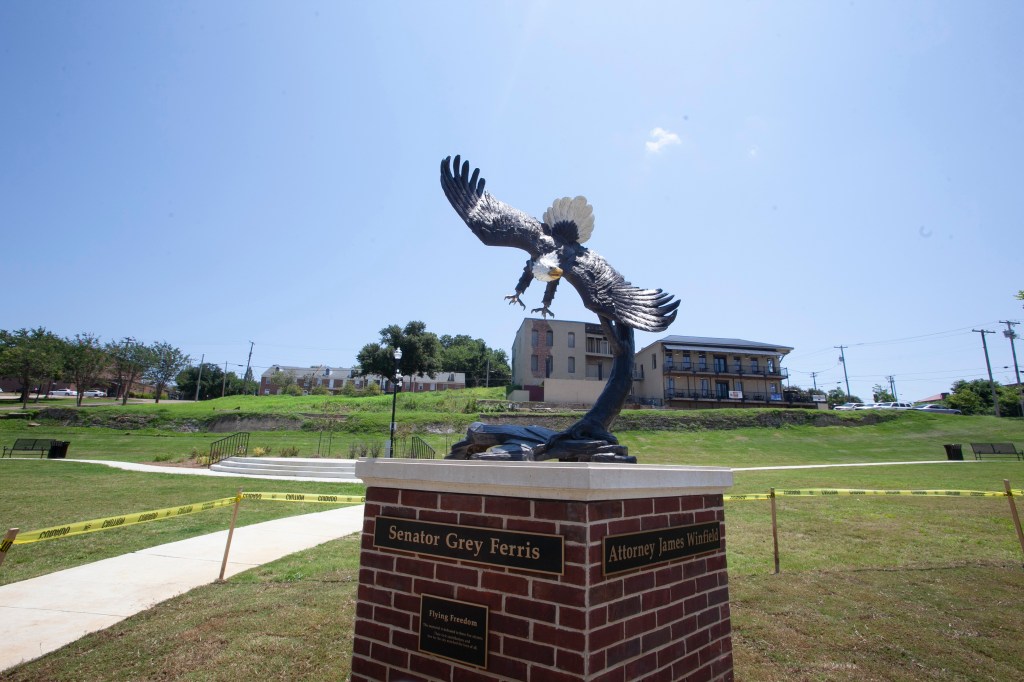 After eight months of construction, city officials and residents will meet Thursday at the corner of Washington and Jackson Streets to dedicate Vicksburg’s newest park. The program begins at 5 p.m. with music, followed by the dedication ceremony at 6. Music will resume at 7 p.m.

Work on the Washington Street Park began in January as employees for Fordice Construction Co. of Vicksburg graded the land, installed sidewalks, built a stage in the center of the park and laid new sod to replace the trampled ground on what was a vacant city-owned lot that previously served as the location for the farmers’ market.

One centerpiece of the park is a statue of an eagle with the names of five people selected by Mayor George Flaggs Jr. who made contributions to the city:

Vicksburg attorney Landman Teller, a former attorney for the NRoute board of directors. He died in April 2018. “I don’t know of any other person who was more committed to, and loved the city like Landman Teller, in my conversations and my growing up around him,” Flaggs said.

Renowned civil rights attorney James Winfield. “He filed the early civil rights lawsuits to create the opportunity for African Americans to be elected to the Board of Supervisors and become an alderman for the city of Vicksburg,” Flaggs said.

Civil rights advocate Lee Willa Miller. “She’s always been an advocate for progress and has done everything from participating in the democratic process and the Democratic Party and is known for her staunch support of voter registration,” Flaggs said.

Grey Ferris was one of the first members to serve on the Vicksburg Warren School District Board of Trustees. He helped consolidate the city and county school systems and was an advocate for education, and also served as a state senator.

Sharen Wilson, a Vicksburg resident Flaggs met downtown, “and had the longest and greatest conversation I ever had about why customer service and changing the mindset about the city was
so important.” Wilson died in 2015 from injuries received in an assault. Flaggs said the music before and after the event will be provided by two DJs.

“We’ve got two of the best DJs in the city,” he said. “I wanted to go with DJs rather than bands because not only do they provide the best music entertainment, but they promote the city.”