Porter’s Chapel kicks off the 2019 season early with game vs. Benton 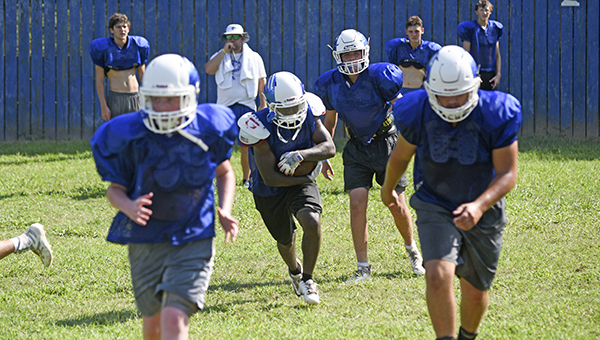 This Friday, while a lot of their peers are working out the kinks and preparing for the regular season at jamborees scattered around Mississippi and Louisiana, Porter’s Chapel Academy and Benton Academy get down to business.

The two teams will kick off the 2019 season a week early when they meet Friday at 7 p.m. at PCA. It is one of seven Week Zero games in the Mississippi Association of Independent Schools, and a necessity because of an odd number of teams (73) in the association.

PCA coach Blake Purvis volunteered his team to play this week — the trade-off is an open date later in the season — but admitted it does make preparation tricky. While most teams get two preseason games, those playing this week only got one controlled scrimmage and a truncated practice schedule.

“It’s definitely been an adjustment. We had less preseason time to make our adjustments. It’s definitely created a sense of urgency to get to where you’re confident going into Week 1,” Purvis said.

The one look Purvis did get at his team was encouraging. The Eagles faced Clinton Christian in a scrimmage last Friday and lost — unofficially, since no score was kept — 30-18. Those 18 points were a marked improvement, however, for an offense that was downright dismal at times last season.

The 2018 PCA squad scored a total of 125 points, with 64 of those coming in two games against Hillcrest Christian and Union Christian. PCA did not score more than 14 points in any of its other eight games.

PCA scored on a long pass against Clinton Christian, as well as a couple of 10-yard runs and was able to move the football.

“I think there are going to be some opportunities for us,” Purvis said. “We missed a throw or two here and there, or a hole in the running game. I didn’t feel like it was uncorrectable things, the mistakes we made. That’s a positive that we had success even with the mistakes, and we can build off it.”

They might also have a chance to start the season with a victory.

Benton has fallen on hard times since reaching the Class AA semifinals in 2015. The Raiders have gone 3-27 over the past three years, and was 0-10 in 2018. They’re on a 14-game losing streak overall.

Despite Benton’s recent struggles, Purvis was not chalking this up as an easy game.

“They’ll be a well-coached team for sure. Benton is always physical,” he said. “I expect to see a physical attack on offense and defense, with a heavy dose of the running game. It’ll be mano y mano.”