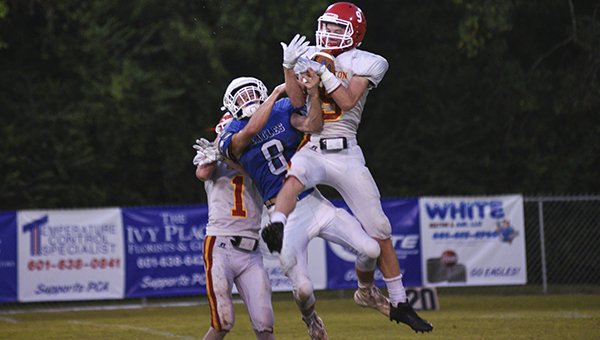 It was Week Zero on the Mississippi high school football schedule and, offensively at least, it was perfectly fitting for Porter’s Chapel Academy.

The Eagles had zero time to do anything, and scored zero points in a 28-0 loss to Benton Academy in their 2019 season opener on Friday night.

PCA mustered only 51 yards of total offense, turned it over four times on fumbles, and surrendered seven sacks. It did not get into positive yardage for the game for good until its final drive.

“Bottom line, we did not block up front. The play starts up front, and there were times when the defensive line or blitzing linebackers were beating the ball to the quarterback. You just don’t stand a chance at that point,” PCA coach Blake Purvis said. “It’s evident. It would have required absolutely perfect catch and throw by a quarterback and receiver to do anything against that.”

The telltale play of the night came late in the first quarter. With the Eagles backed up to their own 1-yard line, Benton’s Rye Yeates — as well as a few of his teammates — broke through the line at the snap. Yeates appeared to pull the ball out of the arms of running back Tyler Washington before he could receive the handoff and celebrated a touchdown that put Benton ahead 14-0 following a two-point conversion.

Two plays later, another fumble set the Raiders up at the PCA 14-yard line. Will Vaughn scored on the next play and J.B. Middleton added the PAT for a 21-0 lead that might as well have been a 100-point margin.

“They had eight in the box, so you can’t run to it and with eight in the box they’re blitzing every time and you don’t really have time to throw a pass. It’s tough,” said PCA quarterback Luke Yocum, who completed two of his first 12 passes in the game.

Yocum finished the game 8-of-21 passing for 86 yards, and Spencer Azlin caught six passes for 76 yards. Most of that came on the final drive, when Yocum and Azlin connected on five quick slant passes in an eight-play span to move the ball to the Benton 8-yard line. An incompletion, a negative run, and a sack and fumble ended the Eagles’ best offensive possession of the night.

“It was there all night,” Purvis said of the quick slant routes. “We had tried it a couple of times early. But heck, by the time (Yocum’s) catching the ball we’re getting hit. We don’t even have time to get it off. It wasn’t necessarily anything that opened up, we just finally had enough time to throw it.”

Benton fullback Josh Dearman ran for 138 yards and a touchdown on 16 carries, and the Raiders put a capper on the game when quarterback Arion Warren scored on a 1-yard run midway through the fourth quarter.

For the most part, however, PCA’s defense more than held its own even as the offense struggled. Benton finished with only 258 total yards and fumbled the ball six times. PCA was only able to recover two of the fumbles.

PCA’s defense, essentially, also gave up only two touchdown drives and continued to play hard even when the outcome was apparent deep in the game.

“I thought our defense was phenomenal. That is a huge positive moving forward. We had a missed assignment on an option and left the pitch man, and then a reverse. That was really the only big plays. We were in position. We fought hard. We bowed our neck. We created turnovers. There were positives there,” Purvis said. “In a situation like that, when our offense is so bad, and a team is pounding on you like that, it really has the potential to get ugly. And we didn’t do that. We didn’t waver on defense regardless of how bad we were struggling offensively. We kept playing the next play. I really think that’s going to benefit us moving forward. That’s probably one of the best defensive efforts I’ve seen since I’ve been here.”