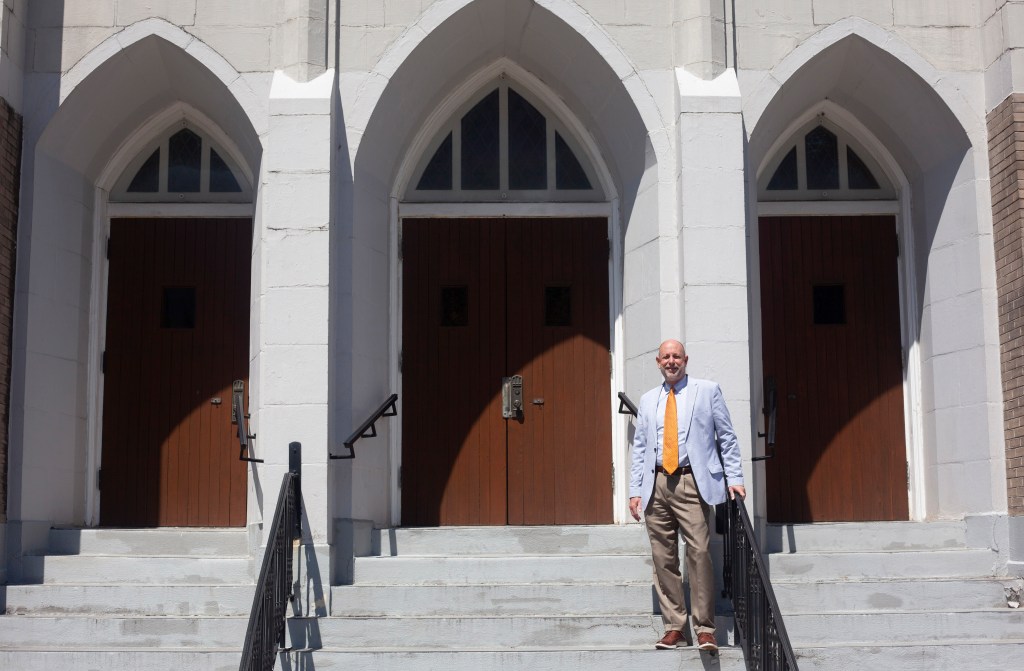 Rev. Kevin Bradley poses for photo outside of Crawford Street United Church on Thursday. Bradley has been the minister at Crawford Street since June 30. (Courtland Wells/The Vicksburg Post)

The Rev. Kevin Bradley traded one body of water for another.

After spending years on the Mississippi Gulf Coast, Bradley and his wife Jaye have moved to Vicksburg, where he is serving as the minister at Crawford Street United Methodist Church. The couple moved to the River City in June and already Bradley said it feels like home.

“We love Vicksburg, and in less than seven weeks it has become home,” he said. Bradley, who is an ordained United Methodist minister, was serving at Caswell Springs United Methodist Church
in Moss Point before being appointed to Crawford Street.

Bradley said he chose Ole Miss because, “It just seemed like the right thing to do.” While in law school, he met Jaye and the couple eventually married.

Bradley said the idea of going into the ministry as a career was something he had struggled with soon after finishing law school.

“It just took a while to get there,” he said.

During the 12 years he practiced law, and before making the final decision to go into the ministry full time, Bradley said he found other ways to serve.

“I did a lot of things as a lay person, served in a lot of leadership positions in he said.

It was only when, Bradley said, he decided that he wanted to “get a little deeper” in the ministry that he reached out to his district superintendent.

“I had a wonderful meeting with the district superintendent and the next thing I knew I was serving a small little local church in North Jackson County,” Bradley said. “I was classified as a part-time local pastor and was licensed by the Mississippi Annual Conference serving a little country church.”

In 2007, Bradley became a seminary student at the Candler School of Theology at Emory University in Atlanta. For three years he commuted back and forth from Atlanta to South Mississippi, where he was also serving two churches at the same time.

“It is a great place to be serving with the amazing ministries going on, and I am blessed just to be a part of this church and this congregation,” Bradley said.

Before retiring in December 2018, Bradley said his wife served as a chancellor.