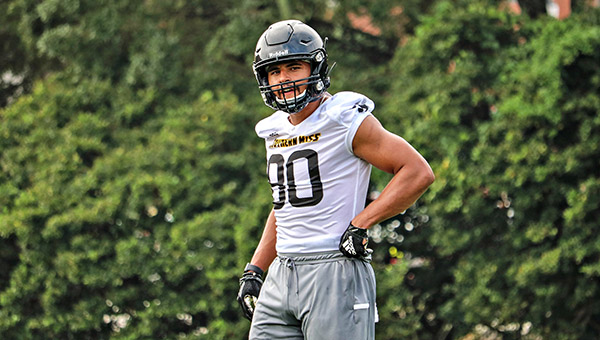 HATTIESBURG — In a wide receivers room loaded with experience, perhaps none is bigger than redshirt senior Jordan Mitchell’s.

Born and raised in Hattiesburg, Mitchell’s childhood dream became a reality when he gave his commitment to Southern Miss in 2014. In fact, 24 hours prior to that, he didn’t hold a single Division I offer.

“Yeah, I think it was always my dream (to play football at Southern Miss),” Mitchell said. “It all works out in mysterious ways. God has a plan for everything and I’m just taking it all in.”

Mitchell played football at Oak Grove High School with the likes of Picasso Nelson Jr., Ty Pollard, and former Southern Miss baseball player J.C. Keys. Mitchell even guided the Warriors to the 2013 MHSAA Class 6A championship and a state runner-up finish the following year. Yet, a Division I college football offer was nowhere to be found until the eve of national signing day.

The offer arrived right before he was planning to sign with Jones County Junior College to play football and baseball. Reality began to set in when he started to look back on his days of running around the Southern Miss campus as a kid.

Memories such as the 2003 win against an undefeated TCU squad and the 2010 win over Power Five foe Kansas came to mind first. Mitchell was also quick to note he even has a photo on his phone in front of the Jim and Thomas Duff Athletic Center when he was still in elementary school.

Then there are players such as Damien Fletcher, Ryan Balentine, Francisco Llanos, and Austin Davis. Mitchell idolized that group growing up as a kid and learned what it meant to be a Golden Eagle from watching them play.

“They were some hard-nosed guys on offense and defense,” Mitchell said. “I definitely think that’s just how Southern Miss is.”

Mitchell took his own hard-nosed approach as a freshman in 2015 and quickly introduced Golden Eagle fans to a name they’d hear in the coming seasons. In that true freshman season, Mitchell appeared in 10 games and tallied 105 receiving yards, including a 19-yard touchdown catch against Texas State.

Heading into his sophomore campaign, Mitchell was ready for a breakout year, but life threw him a curveball. The hometown kid wound up missing the entire season due to injury and even saw his redshirt sophomore season sprinkled with injuries.

Mitchell played in only five games in 2017 and did not catch a pass.

“I’ve had a lot of adversity while I’ve been here, but I’ve managed to come back from injuries and overcome them,” Mitchell said. “Family, teammates, coaches, and my faith (have all helped). That’s really how I’ve managed to be where I’m at today.”

Mitchell has hurdled adversity with flying colors every time it has been thrown at him. In his first full season back from injury, the then-redshirt junior hauled in 37 receptions for 351 yards and three TDs in 2018.

Against North Texas, a stamp was put on his comeback season as he grabbed 12 receptions for 135 yards. He then went on to catch a touchdown pass in each of the next two games.
Expectations are high for Mitchell and the Golden Eagles in his senior campaign.

Mitchell knows the call can be answered.

“I’m trying to take advantage of every opportunity,” Mitchell said. “Whenever they call my number, I just make sure I’m there and answering the call. Going out on top is the goal.”