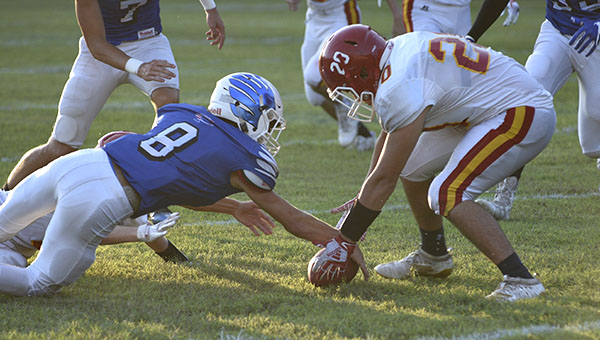 Porter’s Chapel Academy’s season opener did not, to put it mildly, go like it hoped it would.

The Eagles were shut out, 28-0, by Benton Academy. The offensive line was overwhelmed and through three quarters the team had more punts (6) than first downs (3). It didn’t get into positive yardage until its final drive of the game, which started halfway through the fourth quarter.

Even on a disappointing night, however, there was still a silver lining. PCA’s defense came to play, and kept it in a game that could have been an even bigger blowout if not for its effort.

PCA forced five fumbles — it only recovered two — and held Benton to a modest 251 yards of total offense. Considering the game was largely decided by the mid-point of the third quarter, it was a spectacular effort that brightened some spirits.

“I thought our defense was phenomenal. That is a huge positive moving forward,” PCA coach Blake Purvis said. “In a situation like that, when our offense is so bad, and a team is pounding on you like that, it really has the potential to get ugly. And we didn’t do that. We didn’t waver on defense regardless of how bad we were struggling offensively. We kept playing the next play. I really think that’s going to benefit us moving forward. That’s probably one of the best defensive efforts I’ve seen since I’ve been here.”

On PCA’s first defensive play of the season, it stripped the ball from Benton running back Will Vaughn and Michael Tod Andrews fell on it for a turnover. There were two three-and-outs in the first half, another in the second half, and two stops inside the 20-yard line.

Benton did drive for two touchdowns, but its other two were set up by its own defense. Rye Yeates stripped PCA running back Braden Kapp in the end zone for a touchdown late in the first quarter, and another fumble on the opening play of the second set up a second score.

The two touchdowns in a span of 40 seconds put Benton ahead 21-0 and, given the struggles of PCA’s offense, essentially put the game out of reach. It didn’t diminish the Eagles’ effort, though.

The defense continued to keep them in the game — it forced three fumbles in the second half, recovering one inside the 20-yard line — and even the offense finally showed some signs of life.

PCA’s second possession of the second half lasted eight plays and netted a first down, and the final drive got inside the 10-yard line before stalling.

The effort, if not the result, was encouraging, quarterback Luke Yocum said.

“Even though the clock’s running out and you’ve got two minutes and you’re down 28 points, we still see the fight. There’s always a goal to go for,” said Yocum, who finished 8-of-21 passing for 86 yards. He was 6-of-9 for 56 yards on the final drive. “That fourth quarter I told them let’s at least score and get the shutout out of there. We did the best we could to accomplish that, and that’s all you can ask for.”