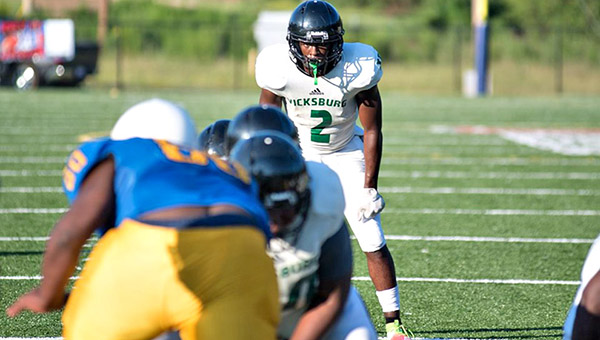 Eleven years ago, when he was an assistant at Vicksburg High, Tim Hughes remembers having to face South Panola in the season-opening Red Carpet Bowl.

The Tigers were at the height of their powers, in the middle of an eight-year run in which they lost one game to a Mississippi team.

Fast-forward a decade and a year, and Hughes is now Vicksburg’s head coach with a similar challenge in front of him. On Friday night he’ll lead the 2019 Gators into their season opener, in the Red Carpet Bowl against perennial Class 6A power Madison Central.

Vicksburg did not win that game against South Panola all those years ago — it hung tough before losing 27-6 — but Hughes said it was beneficial. Vicksburg finished 9-3 that season and reached the second round of the playoffs. So now Hughes is taking the same approach and hoping some of the same lessons are learned by his current players about how to handle a difficult early-season assignment.

“When you get a game like that, you get ready for it. It gets you ready for that season,” Hughes said. “We expect to win the ballgame just on that preparation end of it. It’s helped us out a lot, because we know our first game is Madison Central. I don’t have a problem with it at all.”

On paper, the opening game of the Red Carpet Bowl doubleheader at Warren Central is a mismatch. Vicksburg has only had one winning season since 2008, and finished 3-7 in 2018. Madison Central has been to the MHSAA Class 6A semifinals four consecutive years, and nine times in the past 11 years.

Vicksburg is more experienced than last year, but still looking for a breakthrough. Madison Central is loaded with talent, as usual, and eyeing a state championship run.

For Vicksburg, Week 1 is about more than just winning or losing, though. It’s about taking a step in the right direction.

The Gators appeared to do that last week by generally dominating their two-quarter preseason jamboree game against Wingfield and winning 14-6.

The Gators scored twice, on a short run by Cedric Phillips and a long pass to Laurence Sullivan, and were at the 3-yard line when time ran out in the second quarter. That final drive bled more than five minutes off the clock.

Wingfield, which went 0-12 last season, was far from the stiffest challenge the Gators will see this year. Hughes, however, said the way the Gators carried themselves and controlled a game they should have won easily showed how much progress they’ve made during the offseason.

“You could tell it was a little different for them. It wasn’t just the win. It was how it was done,” Hughes said. “Even the few games that we won last year, it was a battle. If we play a full game, maybe it’s a battle. We achieved what we were going for each time we were going for it. We got off the field on third downs, which was a huge thing for us last year.”

Part of the progress stems from experience. The Gators are replacing a few key players, but also have more than a dozen starters — including most of the offensive line and front seven on defense — returning.

Rather than having to evaluate everyone and do a reboot like he did in his first season as head coach, Hughes said he’s been able to build on last year and move the program forward.

“I liked our structure. We knew what we were doing. There wasn’t a lot of confusion. I know that sounds funny, but that means a lot. It means we can move on,” Hughes said.
Even some of the players with little to no experience have shown flashes of promise, Hughes added. The Gators will be breaking in a new quarterback this season as junior Sha’Kori Ragan takes over for Levi Wyatt.

Wyatt threw for 2,249 yards and 18 touchdowns in 2018, but left the team in the offseason. Ragan played linebacker and kicker last season but was never a quarterback until offseason workouts began. Hughes said Ragan, though, has taken command of a demanding position.

“We had a couple of positions with a lack of experience, and I liked what I saw there,” Hughes said. “It wasn’t just the abilities. It was the command of the game that the quarterback and a couple of other positions had. You know what you have out of others. Now it’s about us gelling together and putting people in the right spaces and stuff like that.”

Hughes admitted that facing a stiff Madison Central defense will be a trial by fire for Ragan and the rest of the Gators. He also said how they handle it, good or bad, will be as important as the final outcome.

“It’s going to be that week after week. The big part of what we have to do is understand the competitive side and that everything is not going to go your way. It’s not about the last play, but it’s always about the next play,” Hughes said. “The faster we can get those positions to realize that and not let a situation get too overwhelming, the faster we can become a really good team.”

RED CARPET BOWL TICKETS:
Advance tickets for the Red Carpet Bowl will be on sale at the VWSD athletic office, as well as Vicksburg and Warren Central junior highs and high schools until 1 p.m. Friday, and at 601 Sports, Just Duett Sports and Michel’s Music until 4 p.m. Friday.