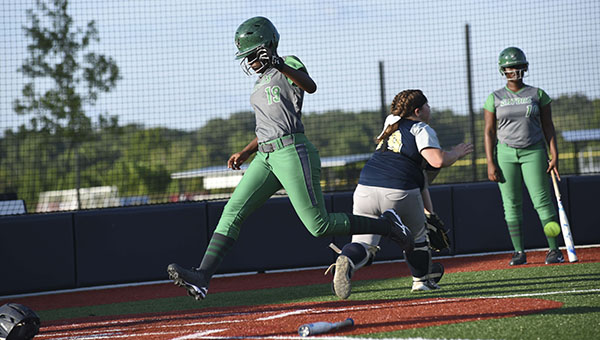 The Vicksburg Missy Gators will certainly have more thrilling victories this season, but Tuesday’s romp over Franklin County was just as good as any of them.

The Missy Gators collected 12 walks — seven of them in the third and fourth innings — and crushed Franklin County 15-2 in a slow-pitch softball game at Sports Force Parks on the Mississippi.

Eliyia Walker and Jazmine Miller both had two hits and four RBIs for Vicksburg, and Jamie Ward went 2-for-4 with two RBIs. Kellisia Walker was 2-for-3 with two RBIs and three runs scored.

Franklin County scored two runs in the top of the first, but Vicksburg (4-2) used four walks to get a run back in the bottom half and tied it in the second on an RBI single by Ward. After that, the Missy Gators blew the game open.

Four walks and an error brought in the go-ahead runs, and the Missy Gators tacked on six more before the end of the inning to take a 10-2 lead. Kellisia Walker hit a two-run single, while Eliyia Walker and Miller each doubled in two runs.

The teams combined for seven errors, but only nine hits and one walk. Kaylee Hoeft went 2-for-3 for Warren Central (2-4-1), while Logan Hardin and Bri Daughtry had one hit each.

Emme Eaton and Katlyn Donovan each had a hit and an RBI for St. Al. The Lady Flashes trailed 3-2 after 2 ½ innings, but Central Hinds scored three runs in the bottom of the third and six more in the fourth to pull away.

Embry and Cooper threw two innings apiece and combined for nine strikeouts as PCA won 12-0 in game one. Neither pitcher walked a batter, but two PCA errors spoiled a chance at a perfect game.

PCA won game two 17-0 as Embry and Morgan combined on a three-inning no-hitter. Embry struck out five and walked one in two innings, and Morgan only needed nine pitches to work a perfect third inning.