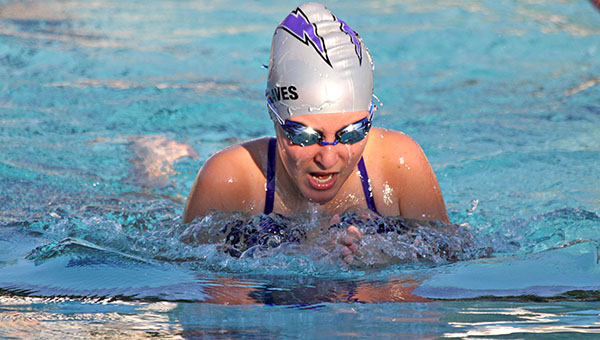 FLASH OR FISH?: St. Aloysius swimmer Samantha Graves knifes through the water on the way to victory in the girls’ 100-meter breaststroke Tuesday at the Red Carpet Classic swim meet at City Pool. Graves also won the 50-meter freestyle and was on two winning relays as the Lady Flashes beat Warren Central and Vicksburg High in the three-team meet. (Karen Martin/For The Vicksburg Post)

In individual events, Larson won the 100-meter butterfly and 100 backstroke. Graves was victorious in the 50 freestyle and 100 breaststroke. Katelyn Clark won the 500 freestyle.

St. Al’s next home meet at City Pool is on Sept. 3, and it will also host the St. Al Invitational on Sept. 14.

Kills and aces were the key for the Lady Vikes. They had 30 kills and served 16 aces. Kendyll Stewart was the top server, with six aces.

St. Al will return to action Monday at Pillow Academy in its district opener.