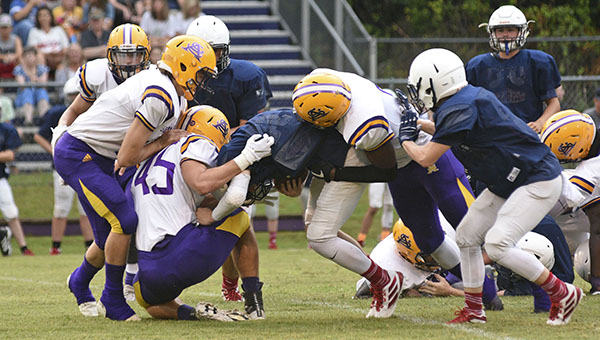 Over the past decade, the St. Aloysius football program has been up, down and all over the middle. It’s played for a state championship and missed the playoffs a couple of times.

For all it has done, however, there is one thing it has not — won a season opener.

The Flashes have lost their first game of the season 12 consecutive times, since beating Cathedral in 2006. They have one chance this year to keep the streak from reaching an unlucky 13 when they take on Hartfield Academy Friday night at Balzli Field.

“It’s called scheduling,” St. Al coach Michael Fields said with a chuckle. “Somebody was putting the rivals right there, we played Cathedral the first game for a few years, and bottom line when you’re playing teams like Hartfield right out of the gate that’s tough.”

In recent years, St. Al’s early-season struggles have not been contained to the opener. Since joining the Mississippi Association of Independent Schools in 2015 it has gone 1-8 in August, and 1-15 in Weeks 1-4. The one victory was by forfeit last season, when Adams County Christian was later found to have used an ineligible player. ACCS beat St. Al 40-0 on the field.

ACCS went on to win the MAIS Class AAA championship in 2018 and is now a district opponent. The Flashes will face them in October during a difficult second-half stretch, which makes beating Hartfield and getting off to a good start even more important.

“It’d be a great morale booster. We had good summer practices, we had some good scrimmages, the jamboree went well. Now it’s time to put it together for the regular season, and we’re just going to try to roll with our schedule. We’re going to find out what we’re made of,” Fields said. “Every game is extremely important for confidence and playoff position. We really need to be on our P’s and Q’s and try to stay focused and play as a team.”

The Flashes have played preseason games the past two weeks and shown signs that they’re ready to end their long losing streak in openers.

In a scrimmage and jamboree against four different teams — roughly the equivalent of one full game — the defense has not allowed a touchdown. The only points came when Brookhaven Academy kicked a long, uncontested field goal in a controlled scrimmage.

Offensively, the Flashes scored two touchdowns in a scrimmage against Amite School Center and dominated a jamboree game with River Oaks.

St. Al held the ball for 17 of 20 minutes in the jamboree and beat River Oaks 7-0. It tied Glenbrook 0-0 in its other jamboree matchup, but had two touchdowns negated by penalties.

“Through the scrimmages and everything we haven’t allowed a point. So I’m pretty pleased with that,” Fields said. “Defensively, we’ve been getting off the field. It’s a lot of three-and-outs. Offensively, our running game is a little better so we’ll be able to control the ball a little bit more.”

Fields credited improved play on the line for the offense’s solid showings, and that side of the ball might get a big boost in the coming weeks. Running back Alvin Brown, who had transferred to Raymond High School, has recently returned to St. Al and is back with the football team.

Brown rushed for a team-high 1,037 yards and eight touchdowns last season. Fields said Brown is still getting back into game shape and might not play a lot against Hartfield, but expected him to contribute heavily as the season progresses. Adam Francisco has been the starting running back during the preseason.

“He’s been practicing this week, so that’s going to be a plus down the line,” Fields said. “Depth wise it’s going to be real big. We’re not just going to throw him in there. Other kids have earned that spot and he’s going to have to earn it back. But I’m sure with his ability, sooner or later if he does the right things, it won’t be long.”