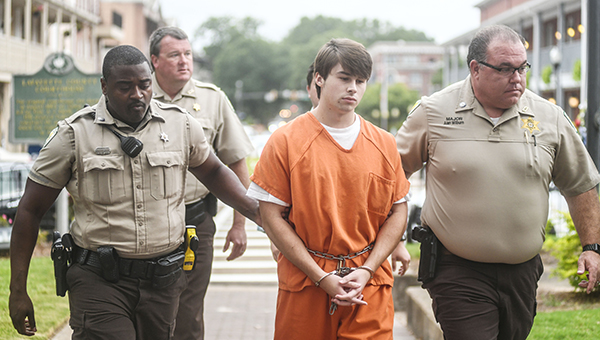 Brandon Theesfeld is led into the Lafayette County Courthouse in Oxford Thursday for a bond hearing in connection with the death of Alexandria 'Ally' Kostial of St. Louis, Mo. (Bruce Newman | Oxford Eagle)

OXFORD (AP) — Lawyers for a man charged with killing a University of Mississippi student are withdrawing their request for a judge to set bail.

Defense lawyers told a Lafayette County circuit judge Thursday they instead want Theesfeld to undergo a psychiatric evaluation at the Mississippi State Hospital at Whitfield.

Theesfeld, from Fort Worth, Texas, is charged with murder in the death of 21-year-old Alexandria “Ally” Kostial of Kirkwood, Missouri.

Kostial’s body was found July 20 near a lake about 30 miles from the university’s campus in Oxford.

The judge asked lawyers to work out the terms of an order for an evaluation. Such exams have required long waits in the past, although waits have eased in recently.

Theesfeld was also an Ole Miss student and has been suspended.