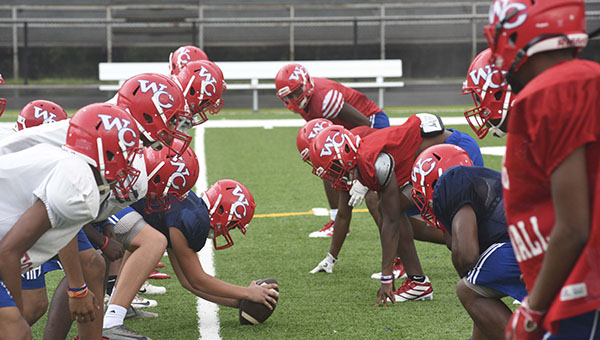 A couple of times this decade, Warren Central has gone through what could euphemistically be called a talent replacement cycle. That’s when a number of experienced players graduate and younger ones rise up to replace them.

The latest cycle is occurring this season. Only four starters out of 22 are back from the 2018 roster. What makes this time different, at least on paper, is the lack of experienced backups flowing up to the top of the depth chart and the gauntlet they’ll face while adjusting to their new roles.

The Vikings open the season Friday at 8 p.m., at home in the Red Carpet Bowl against Holmes County Central. It’s the first of eight opponents they’ll face this season — including three in the first four weeks — that won at least seven games in 2018.

“We’ve got a bunch of guys it’s going to be new to them, and we’re going to throw them in the fire,” Warren Central coach Josh Morgan said. “We’re going to see quite a bit of new faces. How fast they blend in is to be seen, but we’re excited.”

Stovall and Thompson are the only backs who had more than 10 carries last season. Patton, who had 23 receptions for 280 yards in 2018, is the only returning receiver who caught more than four passes. Sims and junior linebacker Darius Smothers are the only players back on defense among the team’s top 13 tacklers.

Senior quarterback Parker Kivett played in a backup role last season, but was elevated to the top of the depth chart through attrition. Likely starter Shane Lewis injured his knee early last season and gave up football to concentrate on baseball. Sophomore Eli Anderson, the program’s QB of the future, transferred to Neshoba Central when his father, assistant coach Brian Anderson, took a job as that school’s offensive coordinator.

Kivett completed 5 of 13 passes for 71 yards, with no touchdowns and one interception, in four games last season.

Morgan, as usual, is an optimistic believer in the system he and his coaching staff have put in place. He believes the Vikings will be fine in the long haul. In the short term, they might take some lumps as they face Holmes County Central (11-2 in 2018), Pearl (8-5) and Brandon (13-2) before region play begins in late September. The Pearl and Brandon games are both on the road.

“We won’t truly know until about three weeks in,” Morgan said of his team’s prospects. “We want to be as sharp as we can, but we know there’s going to be bumps in the road.”

The first bump to get over is Holmes County Central, which is led by former Vicksburg High head coach Marcus Rogers.

The Jaguars won 11 games and the Region 2-5A championship in a breakthrough season and are widely expected to make a deep playoff run this year. The top three tacklers, including former Vicksburg High player Montra Edwards, Jr. at linebacker, are back on defense and so is quarterback Justin Smith.

One of the few missing components for the Jaguars is at the offensive skill positions. They lost two 1,000-yard rushers and their only experienced receiver is senior Earnest Wade. Wade caught four passes for 58 yards and one touchdown last season.

“They’re very aggressive defensively. They’ve got great athletes everywhere. Then on offense, any time you’ve got a quarterback and some receivers it’s a dangerous recipe,” Morgan said. “Last year they had two 1,000-yard rushers and a quarterback that ran for 800, so they’re balanced. And with the first game there’s a lot that’s unknown. It’ll be a lot of figuring out in the first half, on both sides.”

ONLINE:
For live scoring updates on Friday night, follow us at facebook.com/thevicksburgpost and twitter.com/vixpostsports