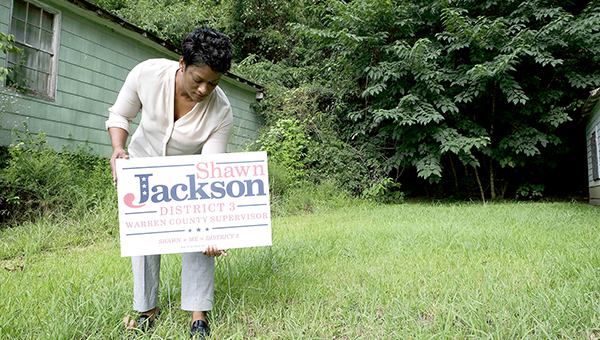 The Warren County Board of Supervisors needs to be more creative in increasing the county’s revenue stream and improving its budget, District 3 supervisor candidate Shawn Jackson said.

Jackson faces incumbent Supervisor Charles Selmon in a runoff Tuesday for the Democratic Party nomination for District 3 supervisor. The winner faces David Sharp, an independent. The polls will be open Tuesday from 7 a.m.

Jackson said the state’s recent assessment devaluation of Entergy’s Baxter Wilson power plant, which resulted in a loss of revenue for Vicksburg and the county, “shines a spotlight on the fact that our board of supervisors should be creative going forward in increasing the revenue for the county.

“To have static budgets that pretty much roll over year to year without too much change is a very risk adverse way of doing thing, but it’s not positioning us for growth,” she said.

Jackson said the board of supervisors must tap into other revenue streams, looking into other grants and also increasing the tax rolls by working to get vacant buildings occupied and back on the tax rolls.

“There are some grants we’d like to look at; if there are communities around us who are able to get sufficient funding for their population and goals, we can also,” she said.

One of the ways to improve the county’s bottom line is through economic development.

Jackson said the supervisors should work with the city on economic development, adding, “A divided house will always fall. One of my goals is to assure we’re on the same accord with the city.

“Industry that’s looking to relocate in Warren County has to hear a coherent story that leads to success for their business. If they don’t hear a cohesive story and plan from city hall and the board of supervisors, it’s going to be ‘no’ as far as bringing jobs and industry,” she said.

Jackson also believes supervisors need to support local businesses and help them expand, and should allow the county’s economic development team to work and bring in companies. She also supports using the U.S. Army Engineer Research and Development Center in economic development.

“Getting ERDC outside the gates and into the community will benefit us and we can get along so much quicker,” she said.

And to bring in business and industry, the county needs to provide adequate roads and a good quality of life for people to settle in Warren County.

Jackson said the county needs to develop a preventive maintenance program, and supervisors need to get out and talk with residents about road conditions.

“When we’ve heard from residents, we can create a schedule where we can prioritize, and work with engineering firms that have the proper set of experience to repair our roads at an economical price.”

She said she also plans to travel District 3 to look at the roads and other problems in the district.

Jackson said Warren County is positioned to attract a diverse group of residents, and can be a viable retirement location and destination.

“But I also feel, and I’m passionate about the fact that we’ve got the terrain to attract the grandchildren of these retirees an retain the children of those retirees.”

She said programs like opening the Old Mississippi River bridge can help develop other activities for biking and canoing and attract businesses “because now you’ve got bikers who need tires and canoeists and things like that, just to enjoy our terrain.”