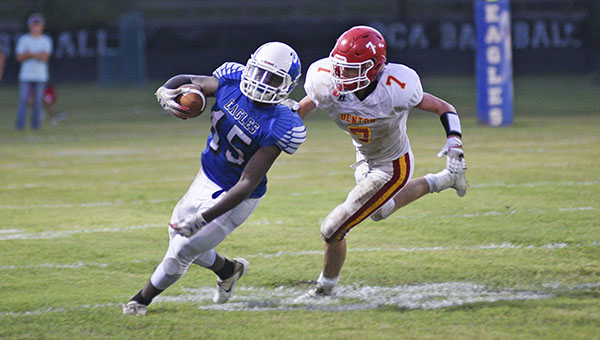 Coming into the season, the Porter’s Chapel Eagles knew their lack of size on the offensive line would be an issue. It didn’t take long to realize how big of an issue.

PCA allowed seven sacks and only had 51 total yards in a 28-0 loss to Benton Academy in its season opener last week. Its quarterback had no time to throw, and running backs were often swarmed under as soon as they took the handoff. In one case, the ball was ripped away from a running back so fast no one was sure exactly how it happened.

“We had a ton of missed assignments up front,” PCA coach Blake Purvis said. “We used double teams when we shouldn’t have, and were letting guys run free. It was just a ton of mental errors that are correctable.”

Whether the offensive debacle flowed from PCA’s own mistakes or a solid game plan by Benton, the final takeaway was a bleak one. Benton laid down a blueprint for other teams to follow on how to dominate the Eagles, until they find a way to stop it.

The next challenge comes this Friday, when Newton Academy comes to town.

“I don’t know why we wouldn’t see more of it. Anybody that gets that film, I would expect to see blitzes and heavy pressure until we back them out of it,” Purvis said. “All it takes is a little bit of success against blitzing like that to slow it down. Once you bust it two or three times, people have a tendency to back off.”

Purvis dug deep into his bag of tricks against Benton, and showed off some gimmicks that could have proved fruitful. The Eagles ran a number of screen passes and tried some max protection schemes. Several times they even ran a gimmick formation with three linemen in their normal positions and three players split wide to either side.

Most of those plays failed because of poor execution. Missed blocks and bad passes blew up a couple of the split formation plays. The screen passes were set up, but quarterback Luke Yocum was unable to complete them because of heavy pressure that forced him to throw while scrambling.

Regardless, Purvis was encouraged by the way those plays were set up. Cleaning up the mistakes, he said, would create the potential for big plays, as well as force the defense to ease its pressure and open up the more basic plays as well.

“There’s plays to be made out there. But, like some of the other stuff, we’ve just got to be better,” Purvis said. “We had two plays in particular that could have gone for 60- or 70-yard touchdowns.”

PCA did show some life late in the game with a standard blitz-beating play. On its final possession Yocum completed five quick slant passes in an eight-play span to wide receiver Spencer Azlin. The passes covered 55 yards and moved the ball inside the Benton 10-yard line.

Now they just need to carry that momentum into this week against Newton Academy. The Colonels finished 2-9 last season, but have several key players returning including running back Eli Finnegan (842 rushing yards, six touchdowns in 2018) and quarterback Zandar Meeks.

Newton has won six of seven meetings all-time against Porter’s Chapel, including six in a row, but the teams have not played each other since 2014.

“They’re big and physical, a traditional Newton team. They’ve got size and a physical running back,” Purvis said. “The quarterback throws the ball decent. They can run and throw. They’re a little more balanced team than we saw last week.”

ONLINE:
For live scoring updates on Friday night, follow us at facebook.com/thevicksburgpost and twitter.com/vixpostsports