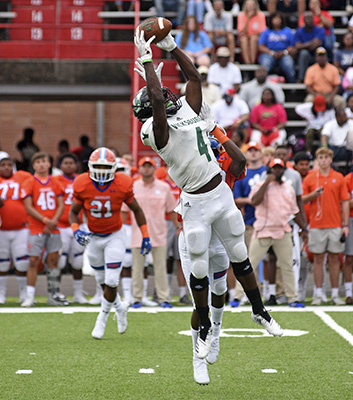 Vicksburg High head coach Tim Hughes said he liked the way some of the individual matchups played out against Madison Central, and there was enough evidence to back him up.

In the big picture, though, Madison Central showed why it’s always in the mix to contend for the MHSAA Class 6A championship and why Vicksburg is still trying to climb back to a level of consistent success.

“It was a tough one. We fought hard. I think we competed and we had a lot of spirit,” Hughes said. “They (Madison) were good. They didn’t make the mistakes. We didn’t make many mistakes. There were a lot of things we did a whole lot better than we did at any point in time last year. They were the No. 1 team in the state in 6A and we did what we could do with them. We’re going to get better. So we found out exactly what we’ve got to get better at, and we’ll do that.”

Holiday completed 13 of 20 passes for 156 yards and two touchdowns, with no interceptions. Both of his touchdowns came in the first half at pivotal moments to help bury the Gators’ chances.

Madison Central scored off the opening kickoff, capped by Holiday’s 20-yard TD run. On the next play from scrimmage — Vicksburg’s first of the season — an early snap hit QB Sha’Kori Ragan in the face and fell to the turf. Madison Central lineman Braxton Bolden recovered it, and two plays later Holiday threw a 13-yard TD pass to Tyler Austin for a 14-0 lead with 6:42 left in the first quarter.

The Jaguars stretched the lead to 21-0 with a 16-play, 85-yard drive capped by Jordan’s 5-yard TD run midway through the second quarter. Then, in the closing moments of the first half, Jordan took a screen pass 43 yards for another touchdown and a 28-0 lead with 14 seconds left.

Jordan’s touchdown was one of seven third downs the Jaguars converted in the first half. They were 7-for-9 in the half, and 8-for-12 in the game on third down.

“We had some fourth down stops. We did some things well. It was just inconsistent,” Hughes said. “A lot of it was just physics. It was the physicality of it, of what they could deliver. The second half we also had to start subbing some guys in, and it was guys that couldn’t fit what we needed to do. They did what they could and they did it with heart, but it just turned into what it turned into.”

Jordan added a 33-yard touchdown run in the third quarter and Duke Arnold a 9-yard run in the fourth to finish the scoring for Madison Central. Arnold had 99 rushing yards and a touchdown on 23 carries. Jordan had 120 total yards — 77 rushing and 43 receiving — to go with his three touchdowns.

Although Madison Central’s victory was never in doubt after it scored on three of its first four possessions, Hughes wasn’t entirely displeased with Vicksburg’s effort. The defense did force a couple of three-and-outs against Madison’s first-team offense and came up with a fourth-down stop to force a turnover on downs in the second quarter.

Ragan finished 8-of-16 passing for 59 yards in his debut as the Gators starting quarterback. Deandre McCalpin caught two passes for 36 yards. Several passes were open for big plays, but missed because of bad throws.

All in all it was a mixed bag — not great, but not as bad as it could have been, either.