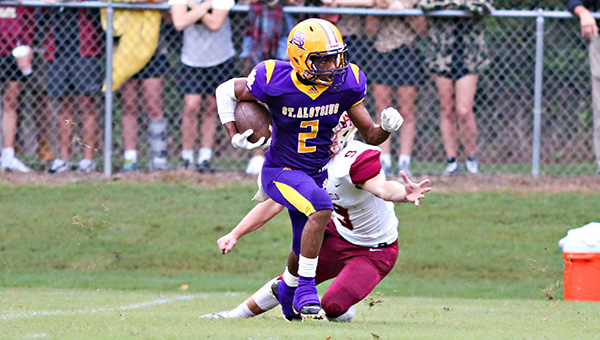 Thirteen was not a lucky number for St. Aloysius.

Will Elliott ran for one touchdown and threw for another, Brandon Buckhaulter returned an interception for a touchdown, and Hartfield Academy continued St. Al’s struggles in season openers by beating the Flashes 29-10 Friday at Balzli Field.

St. Al’s losing streak in openers was extended to 13. It has not won a season debut since 2006.

“That was the first thing I thought about,” St. Al coach Michael Fields said. “Maybe it’s a jinx or something. But now our attention has to go to Greenville Christian and we’ll see if we can get a ‘W’ on the board.”

Hartfield led 13-3 in the second quarter when the game turned decidedly in its favor. St. Al had a long pass that likely would have been a touchdown dropped, and Hartfield answered with a long drive of its own. Austin Willis capped things off with a 19-yard run in the last two minutes of the half to give the Hawks a 20-3 lead at halftime.

From there, Fields said, Hartfield’s depth and size on the offensive line controlled the game. Elliott iced it with a 57-yard touchdown run in the fourth quarter.

“It was a step up in competition. They had depth and pounded us up front,” Fields said. “It was pounding and converting plays when they had to. We played well. We just have to learn to play up to the level of competition. We learn to make plays, and I think we’re going to be OK.”

Hartfield’s Weston Adcock booted a 30-yard field goal late in the fourth quarter and also went 2-for-4 on PAT attempts.