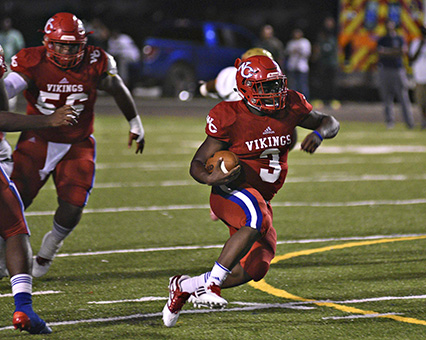 With a bunch of unfamiliar faces, Warren Central used a familiar method to pull off an upset in the Red Carpet Bowl.

The Vikings used a powerful running game and strong defense, their calling cards for decades, to shut out Holmes County Central 13-0 in the second game of the Red Carpet Bowl doubleheader Friday night at Viking Stadium.

Jerrious Stovall scored the game’s only touchdown on a 41-yard run early in the third quarter, and Josh Griffin kicked a pair of first-half field goals for the Vikings as well as a PAT.

Holmes County Central is considered a championship contender in Class 5A, but suffered its second shutout in a row. It lost 21-0 to Olive Branch in the second round of the playoffs last season.

The most noteworthy performance was by Warren Central’s defense. With 10 new starters on the field, WC posted its first shutout since Nov. 3, 2017 against Provine.

The Vikings made two big stops in addition to generally solid play on defense. Late in the second quarter, Holmes’ Earnest Wade caught a long pass and took it down inside the 5-yard line before he was chased down by Tevin Bell.

Bell’s hustle paid off. The Vikings wound up forcing a turnover on downs to maintain their lead into halftime.

Later, on the first play of the fourth quarter, WC forced another turnover on downs to stop a Jaguars drive just on the plus side of midfield.

On offense, Stovall moved the chains all night long and broke a long touchdown run up the middle with 10:27 left in the third quarter to give WC some breathing room. In the fourth, Malik Sims had a long run deep into Holmes territory to help run out the clock.

Warren Central won its third consecutive Red Carpet Bowl and capped a first for the kickoff doubleheader. It marked the first time since the RCB went to a multiple-game format in 1992 that both contests resulted in shutouts.