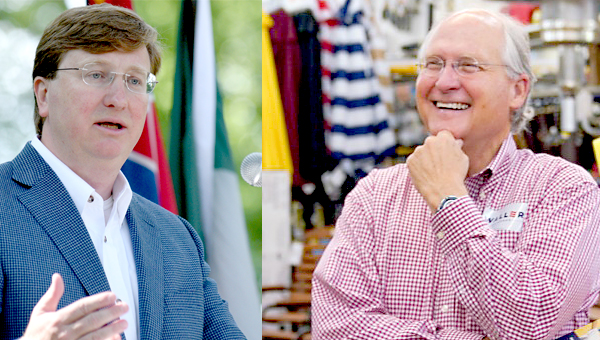 Voters will decide Tuesday between Lt. Gov. Tate Reeves and Justice Bill Waller Jr. for the GOP gubernatorial nomination. Polls across the state opened at 7 a.m. and will close at 7 p.m.

Reeves, 45, fell just short of a majority in a three-person GOP primary Aug. 6. He is endorsed by Republican Gov. Phil Bryant, who could not seek a third term, and by Republican former Gov. Haley Barbour.

Waller, 67, is endorsed by the candidate eliminated in the first round of voting, state Rep. Robert Foster and by some former state Republican Party chairmen.

The winner of Tuesday’s primary runoff will advance to the Nov. 5 general election to face Jim Hood, the state’s four-term attorney general who is trying to become Mississippi’s first Democratic governor since Ronnie Musgrove was unseated in 2003 after a single term.

The general election ballot also will have two candidates who are running low-budget campaigns — the Constitution Party’s Bob Hickingbottom and independent David Singletary.

Mississippi, Kentucky and Louisiana are the only states electing a governor this year. Mississippi’s is the only race without an incumbent.

Reeves has outspent all other candidates in the race. He served two terms as state treasurer before being elected lieutenant governor in 2011 and has pushed tax cuts through the Republican-controlled state Senate.

Waller is a retired brigadier general in the Mississippi National Guard and son of the late Gov. Bill Waller Sr., a moderate Democrat who served from 1972 to 1976.

The two Republicans have clashed over state spending.

Waller has said Mississippi should consider increasing its gasoline tax for the first time since 1987 to help fix crumbling highways and dangerous bridges. He also wants to eliminate the part of the state income tax.

Reeves says he wants to eliminate part of the income tax but opposes a gas tax increase. He says a plan set by the Legislature last year will help pay for infrastructure. It included authorization for a state lottery, which is on schedule to start up late this year.

Waller has also said Mississippi should allow people with low-income jobs to purchase health insurance coverage through Medicaid. Most states have expanded Medicaid to the working poor, which is an option under the federal health overhaul that President Barack Obama signed into law in 2010, and Waller says an injection of more federal money could help Mississippi’s struggling rural hospitals. Reeves says he opposes adding people to Medicaid.

Hood says he wants to expand Medicaid. He says he wants to put more money into fixing roads and bridges, but he has not specified a funding plan. Hood also says he wants to reduce Mississippi’s 7 percent grocery tax — at least cutting it in half and possibly eliminating it altogether.