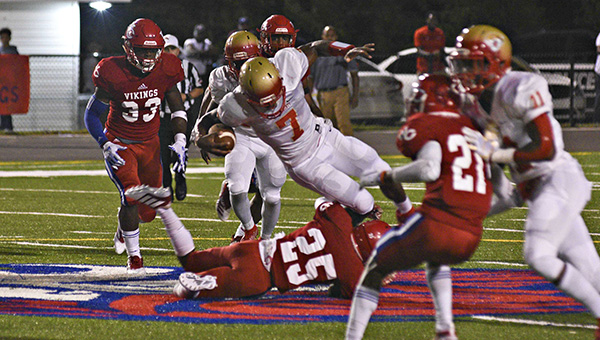 In nine seasons under head coach Josh Morgan, Warren Central has earned a reputation as a tough, hard-nosed defensive football team that will give opponents fits regardless of their talent or experience level.

It wasn’t a major shock, then, that a unit that was replacing 10 starters turned in a nearly flawless performance in its debut.

“We were playing as a unit and playing together. I thought we tackled well for the first game, and we pursued the football well,” Morgan said. “It was a big win because it was the first game and a big stage. We had so many question marks. We were pleased to see the way we competed and played. As long as we continue to win and get better, that’s the big thing.”

Warren Central’s only returning defensive starter is linebacker Malik Sims. Although some others saw playing time last season, fellow linebacker Darius Smothers is the only other player who ranked in the top 13 on the team in tackles last season that is back this year.

Sims and Smothers both played well against Holmes County Central. Smothers had a team-high 10 tackles. Sims had eight to go along with a sack, a forced fumble and 53 rushing yards on offense.

Plenty of newcomers stepped up in big spots, however, including some in ways that didn’t jump off the stat sheet.

Junior linebacker Taylen Smith had six tackles, one sack and a fumble recovery. Ten players recorded at least one tackle for loss. Junior cornerback Tevin Bell ran down Holmes receiver Earnest Wade at the end of a long pass play to save a touchdown. Holmes wound up turning the ball over on downs after having first-and-goal at the 5-yard line.

That series had one of 11 third down opportunities the Jaguars were unable to convert. They were 1-for-12 in the game on third down.

“Our coaches did a really good job of preparing them, and the guys did a good job of doing what we asked them to do. We can work with that,” Morgan said.

Morgan also noted that, while the defense shined brightest, the rest of the team pulled together to earn the victory with a superb effort in all three phases of the game.

Kicker Josh Griffin made two field goals, from 42 and 32 yards, and a PAT. He also had one kickoff touchback and averaged 33.4 yards on five punts.

The offense, while not spectacular, was able to generate 157 rushing yards and controlled the clock. Running back Jerrious Stovall scored the game’s only touchdown on a 41-yard run early in the third quarter and Sims’ 40-yard burst helped seal the game late in the fourth quarter.

It was the kind of team effort the Vikings will need as they break in a host of new starters and try to navigate a difficult schedule. Up next is a road trip to Pearl (1-0) this Friday night.

“We focused very hard on doing the little things right and not getting too complicated,” Morgan said. “We did a good job with that, and with not making mistakes, and on special teams. Those are things we try to trademark our program around.”

UP NEXT:
• Warren Central at Pearl
• Friday, 7 p.m.
• Radio: 105.5 FM
• For live scoring updates, follow us at facebook.com/thevicksburg post and twitter.com/vixpostports