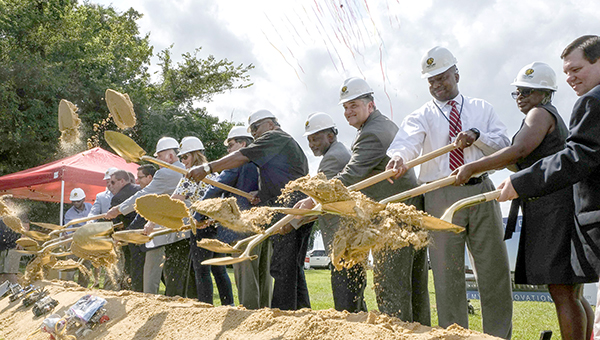 The future of education in Warren County began Wednesday with the turn of a shovel and the movements of robots.

Standing behind a pile of sand on a lot at the corner of Mission 66 and Rosa A. Temple Drive, students, using robots they had designed and built moved dirt to help mark the groundbreaking of the new Academy of Innovation.

Then, after the robots had done their work, dignitaries, including local elected officials, those representing the Vicksburg Warren School District, representatives from Dale Bailey Architects and contractor Century Construction took hold of shovels to add their mark on the start of the $16.4 million project.

More than 200 people, including 122 students, attended the program, which included performances by the Academy of Innovation band and choir and an unveiling of a model of the completed school created by teachers and students using 3D printer technology at the school.

“What this school district is doing is creating a culture of courage,” said Pablo Diaz, president of the Vicksburg-Warren Chamber of Commerce. “A generation of Vicksburgers courageous enough to take the risk, because the essence of progress, the essence of business, the essence of entrepreneurship and job creation, the essence of innovation is risk taking,” he said. “Taking risks is something new.”

Gary Bailey, with Dale Bailey Architects, the project architect, said about 30 people were involved in the building’s design.

He pointed to a group of students seated to his right, “These kids right here are why it was designed — every single one of them and those who follow.”

Bailey said the building was a laboratory for children to learn.

“It’s a dang good laboratory and you’re going to be proud of it,” Bailey said.

Flaggs commended the school trustees for getting the $83 million capital improvements bond passed to build the school and giving students “the best opportunities they can get.”

Vicksburg Warren Superintendent of Education Chad Shealy commended the board of trustees, saying, “all five of them have a heart for our children like no other. They are very passionate.”

Shealy discussed the history behind the development of the Academy of Innovation leading to the start of construction to the new facility.

The Academy of Innovation serves seventh- and eighth-grade students, and has grown from 80 students five years ago to 392 today.

It is a STEM (Science, Technology Engineering and Math) Academy, and focuses on student-centered learning, providing experiences that motivate students through a rigorous and technologically enhanced curriculum and developing life-long learners.

Last year the Academy of Innovation was named the only Leader In Me Lighthouse School in the state of Mississippi. It is presently housed in the former Grove Street School, built in 1949.

The new Academy of Innovation was made possible by the passage of an $83 million facilities bond issue in March 2018.

Improvements to many of the district’s athletic facilities are also included.

“This is a project for the future,” School Trustee Joe Loviza said of the academy. “And with ERDC (the U.S. Army Engineer Research and Development Center) here, it will really take off.”