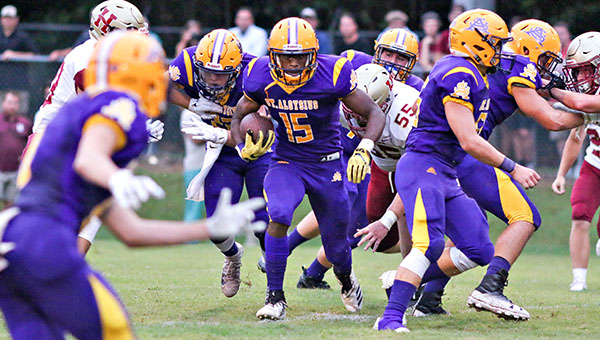 On paper, St. Aloysius’ season opener was utterly forgettable. The Flashes were outgained by nearly 300 yards, did not score a touchdown until the fourth quarter, and lost 29-10 to Hartfield Academy.

On film, coach Michael Fields said, it wasn’t nearly that bad. The Flashes forced three turnovers, had some chances to score early on, and mostly hurt themselves. A handful of easily identifiable plays caused them to lose control of the game.

It’s the kind of analysis that happens after Week 1, when nothing is ever as bad — or as good — as it seems, and there’s always room for improvement. The Flashes will try to take it all in stride, shrug off the loss, and find the win column when they go on the road this Friday night to play Greenville Christian (0-1).

“We played a good football team,” Fields said of Hartfield. “They had some transfers come in, and they were big and agile. I don’t feel bad about losing to a good football team. We could have helped ourselves. We held them pretty good. They were nickel- and diming us and then they broke off two big runs that were nearly a hundred yards.”

Two eye-popping trends from the opener were St. Al’s porous run defense and its inability to get anything going on offense. Hartfield ran for 325 yards and averaged 6.9 yards per carry. Offensively, St. Al mustered just 70 total yards, with 65 of it coming on the ground. The only pass it completed in seven attempts was by halfback Alvin Brown to his brother Trinye Brown for a 5-yard touchdown in the fourth quarter.

Fields said the struggles on both sides of the ball had more to do with Hartfield controlling the line of scrimmage with its size advantage than anything else.

“Sometimes you play a team that’s so good up front that they can take you out of what you want to do,” Fields said.

This week, Fields added, that won’t be as big of an issue. He said Greenville Christian is similar in makeup to St. Al, with some talented skill position players and an average-sized line.

Greenville Christian is coming off a 23-0 loss to Tri-County in its opener.

“They’re just like we are. What they have is speed and quickness. They have good skill guys. We’re going to have a little more depth than them. I feel good about it,” Fields said.

Although it’s only Week 2 of the high school football season, Fields said the game against Greenville Christian is an important one. St. Al has not won a game on the field — one loss was later reversed by forfeit because of an ineligible player — in August since it joined the Mississippi Association of Independent Schools in 2015.

The District 3-5A opener is also next week, at home against Central Hinds. Ending the late summer losing streak and going into a key district game on a high note are both major goals this week.

“If we plan on doing what we’re supposed to do, this week is almost a must-win,” Fields said. “We’ve got our first district game coming up. We need to go into that one with some confidence.”