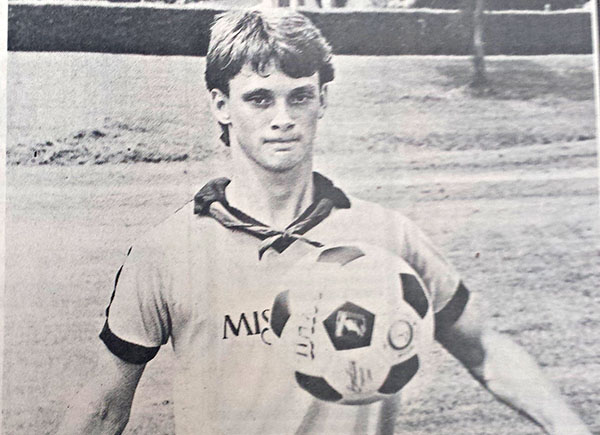 Gates weaver is seen prior to the 1983 Mississippi high school soccer all-star game. The former Vicksburg High star went on to play professionally in Europe and will be one of seven Warren County sports greats inducted into the Vicksburg Warren School District Athletic Hall of Fame on Sept. 5. (File/The Vicksburg Post)

This is the first in a series of stories highlighting the members of the Vicksburg Warren School District Athletic Hall of Fame’s Class of 2019.

Like a lot of young people in, Gates Weaver spent a summer traveling around Europe and finding himself. He visited Holland, Germany and Austria while playing for the U.S. U-17 national soccer team and, when he came back, found he’d grown not just as a person, but as a soccer player.

“Our first game my junior year we played Brandon. They were ranked third in the state. I scorched them. We beat them 2-0 and I bananaed one around the goal keeper,” Weaver recalled. “In one month I’d changed. That’s when I knew I was going to the next level.”

Weaver went to the next level and beyond. From starring at Vicksburg High, to playing in college and professionally in Europe and the United States, Weaver put together one of the most accomplished careers of any soccer player in Warren County history.

The ceremony is Sept. 5 at the Vicksburg City Auditorium. Tickets are $20 and are available at the VWSD athletic office.

“I am humbled, exuberant and excited. I don’t know what to tell you,” Weaver said of going into the Hall of Fame.

Weaver was among the first generation of high school soccer players in Mississippi, before it became a sport sanctioned by the Mississippi High School Activities Association. Vicksburg High was part of the Central Mississippi Soccer League, which stretched from Vicksburg to the Jackson area. Other parts of the state had similar regional leagues that played for their own championships.

Weaver began his high school career in 1979 and soon emerged as one of the CMSL’s top players. The four-year starter scored more than 100 goals for the Gators — 24 as a freshman — and was selected to play in the first statewide high school all-star game in 1983.

It was between his junior and sophomore years when things really took off, though. That was when he went to a tryout for the U-17 national team and was invited to play on a summer tour of Europe. After a month of facing top international competition, he said he returned to the U.S. with a different skillset than his peers.

After being a goal scorer for the first half of his high school career, the attacking midfielder was soon seeing passing lanes and dishing out assists at an equal rate.

“I just learned how to play at a top European level,” Weaver said. “It was surreal. It almost feels magical or mystical. It almost didn’t feel real, I almost had to reflect and think, ‘How did I play the last two years?’”

Weaver’s first trip to Europe was not his last. After graduating from Vicksburg High he returned to West Germany to attend college and play soccer at the University of Maryland’s campus in Munich. While there, he also gained the attention of some local club teams.

Weaver was recruited to play for Bajuwaren, a third-division affiliate of the German Bundesliga’s 1860 Munich club. He did well enough with Bajuwaren to be loaned out to Bayern Munich — a highly regarded first division Bundesliga team — for a few games.
Making that time even more special, he said, was that his parents Donny and Virginia Weaver got to see him play for Bayern Munich. They were in the military and stationed in Germany at the time.

“My parents got to see me play on my birthday,” he fondly recalled. “My mom was my biggest fan. She was there in snow, ice, everything.”

Unfortunately, the good times did not last. After suffering a leg injury, Weaver was sold to an Italian league team in 1985 and only played one more year in Europe. A combination of limited opportunities, playing style and a cultural divide made it a miserable experience, he said.

“Back in the day, in Germany the Germans play. In Italy, the Italians play. Outsiders don’t play a lot. I didn’t adjust well to playing in Italy,” Weaver said. “I only scored a few goals. I had to learn Italian. It didn’t work out well.”

The European leg of Weaver’s world tour had ended, but there were plenty of gigs left to play stateside. He returned home to Mississippi and in the summer of 1986 accepted an offer to play at Northeast Louisiana University — now known as Louisiana-Monroe — only to find out when he got to campus that its soccer program had been disbanded. He instead enrolled at Southern Miss.

“My parents were in Italy at the time and we didn’t talk every day. They didn’t know I was at USM for a month and a half,” Weaver said.

Weaver graduated from Southern Miss in 1990 and moved to Orlando, Florida soon after. He played with the Orlando Lions, a semi-pro team that was part of several outdoor and indoor leagues from 1985-96.

Weaver played in Orlando, while also working at the Disney Beach resort, before eventually moving back to Mississippi in 1996. He continued to play with various club teams until 2004, when years of knee injuries finally started to wear on him. He had first injured his knee while playing at Southern Miss, and five more surgeries followed in the next 15 years.

Weaver’s involvement with the game was hardly finished, though. The third act of his soccer life was becoming a referee.

“I didn’t want to retire as an old athlete. I’ve had six knee surgeries — three and three. I started refereeing around 2004 or 2005 and I was a natural,” Weaver said. “I could run and I was quick thinking. I made it to Grade 5, which is one step away from being a national referee.”

Weaver quickly ascended the ranks to become one of the top soccer referees in Mississippi, and has also worked major regional club tournaments and national college games. In 2012 he was part of the crew for the NCAA Division II women’s semifinals and the NJCAA national championship game.

Playing the game at a high level helped in the transition, but he said he’d served a sort of apprenticeship years earlier without realizing it.

While in high school, he refereed some youth games. Then, while in Germany, he officiated low-level club games while playing for Bajuwaren. The first officiating job might have paid better than the second, he joked.

“In Europe, when you’re not playing they expect you to referee some games for a meal and a beer,” Weaver laughed. “I didn’t know what I was building to at the time. All those skills played into it.”

Weaver’s bread and butter these days is officiating high school soccer. He is an executive assigner for the MHSAA who helps arrange officiating assignments for games played in the Hattiesburg area.

He has also been the center ref for 13 state title games.

“Most high-level players become coaches, not referees. I can be where the play is going to be. I’m proactive and I know when it’s a no-call,” Weaver said.

Now 55 and living in Hattiesburg, Weaver still has plenty of games left in the tank, no matter where he is on the field. And it all traces back to that one life-changing month in Europe in the Summer of ’82.

“I wish more people had that opportunity. Just by being around the people in this nation for one month, and in college for a while, it benefited me so much,” he said. “The skills, the people relations, international relations. I came back to this country with a totally different mindset.”