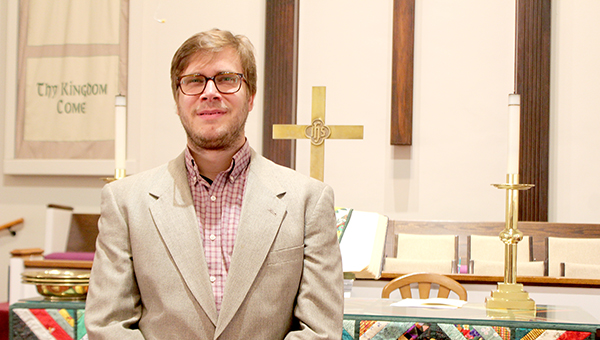 The Rev. Alvin Hoyle, the new pastor for Hawkins United Methodist Church is a former member of the church. Hoyle came to Hawkins in June. (John Surratt | The Vicksburg Post)

When the Rev. Alvin Hoyle came to Hawkins United Methodist Church in June, it was like coming home.

He and his wife Bess were members of the church when they received the call to the ministry.

His wife, who is senior pastor at Ridgeland First United Methodist Church, is a Vicksburg native who grew up as a member of Hawkins.

Hawkins was Hoyle’s inspiration to become a minister.

A native of Hattiesburg, he met his wife during his final semester at Mississippi College.

“She was in her first semester of law school,” he said.

The couple moved to Vicksburg, where Hoyle was a teacher and his wife worked part-time at Hawkins’ nursery school while she finished law school.

“Bess got a job working at the nursery at Hawkins, and I didn’t have anything else to do on Sunday mornings. I kind of wandered in and started getting to know the people here, and the minister here at the time was Chris Young. That was probably about 12 years ago.

“I just really began to get into the life of the church. In good Methodist language, ‘My heart was strangely warmed,’ and I entered the seminary when I felt the calling to the ministry during that period.”

The couple enrolled at Asbury Theological Seminary in Wilmore, Ky., after the birth of their twins.

“We were taking care of babies, and then toddlers the rest of the time,” Hoyle said.

After graduating from Asbury, Hoyle spent 10 years serving at several United Methodist churches, including a church in Kentucky. He was associate pastor at Parkway Hills United Methodist Church in Madison and senior pastor in Gautier for several years.

Returning to Hawkins, he said, “Was exactly like coming back home. I love the people here. I’ve had about 10 years as a pastor. It’s a lot like beginning any new appointment, but I knew a lot of people, I had deeper roots with a lot of people here; I’ve known them as long as I’ve known my wife. And they pretty much raised her.

“It’s one of the smoothest transitions I could ever imagine.”

The church members, he said, “Are great to work with; they’re passionate, they’re artistic, they’re highly skilled and gifted in so many areas.

“They have such a love for the community that surrounds them, and that love is exhibited in several ways. We have a preschool we’ve been maintaining for 40 years and it’s still going strong. I feel we’re going in a pretty good direction as a church.”

One of the things the church is doing, Hoyle said, is focusing on how it can have a strong presence in the community. One project in that direction, he said, is a planned dinner theater to raise funds for flood victims at Eagle Lake area and help rehabilitate that area.

Hoyle and his wife live with their three children, four dogs and three ducks at the church parsonage. His wife, he said, commutes to Ridgeland daily.

He said having the same profession as his wife helps them both to be better at what they do.

And he doesn’t plan to leave Hawkins.