No rest for Warren Central as trip to Pearl looms 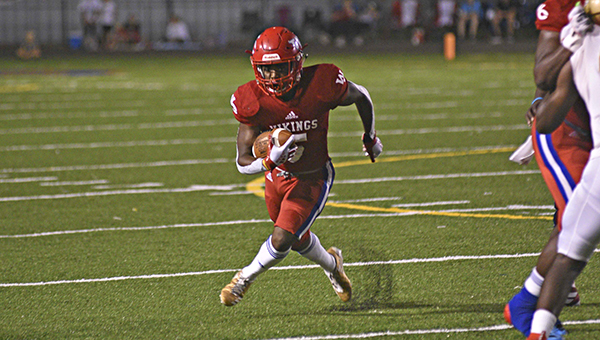 Warren Central got to celebrate a huge win over a quality opponent last week — for a few hours. Against this type of schedule, in this kind of league, that’s all it’ll ever get.

Coming off a shutout win over Class 5A championship contender Holmes County Central, the Vikings have to turn around and go on the road this week to play Class 6A contender Pearl (1-0). It’s another grueling challenge in a season filled with them, and if they can survive it will start to mark the Vikings as a contender in their own right.

“It makes you stay focused, for sure,” Warren Central coach Josh Morgan said with a chuckle. “But it’s a good kind of focus. You don’t look back, win or lose. It’s so early in the season that we still have a lot of looking in the mirror stuff to do and making sure we’re doing things right.”

Warren Central did almost everything right in the Red Carpet Bowl against Holmes County Central. It held a team that won 11 games and averaged 35.6 points per game last season to 157 yards of total offense, including 16 rushing yards.

The Jaguars only converted once on 12 third down attempts, committed two turnovers and turned it over on downs two other times. One of the turnovers on downs came after the Jaguars had first-and-goal at the 5-yard line following a long pass.

Offensively, Warren Central racked up 157 rushing yards — senior running back Jerrious Stovall led the team with 74 yards and a touchdown — and got a pair of field goals from kicker Josh Griffin.

“We focused very hard on doing the little things right and not getting too complicated,” Morgan said. “We did a good job with that, and with not making mistakes, and on special teams. Those are things we try to trademark our program around.”

One of the other trademarks is not backing away from a challenge, particularly in the non-region portion of the schedule, and they’ll certainly live up to that this week.

Pearl won its opener, 32-22 over Clinton, and is ranked No. 4 in both the Class 6A and overall Mississippi Associated Press high school football polls this week. Warren Central is not ranked, but received votes in both polls.

Pearl won eight games in 2018, the year after it won the Class 6A championship, and has all 11 starters back on offense.

Among those are running back Kenyatta Harrell, quarterback Gunnar Dennis and offensive linemen Davion Carter and Kaleb Cadiere. Harrell ran for 1,532 yards and 19 touchdowns last season. In the season opener against Clinton he ran for 193 yards and four touchdowns on 23 carries.

Dennis was 10-of-14 passing for 187 yards, with one touchdown and one interception, against Clinton.

“They’re a very solid program with a lot returning from last year. Top to bottom, they’ve become one of the better teams in 6A,” Morgan said. “I think they have all 11 starters back, an all-state running back, a couple of three-year starters on the offensive line. It’s that type of group. They’ve got big expectations, and rightfully so.”

Pearl is one of Warren Central’s oldest rivals, with a series that dates back to the days of the Little Dixie Conference. The teams played every year from 1971-2000, then only once in the next decade and a half. The series resumed in 2015 and has been highly competitive ever since.

The last four meetings between the teams have all been decided by seven points or less. In three of the four games, the winning points were scored in the last four minutes.
Pearl has won the last two meetings, rallying back from 14-point deficits both times.

Last year, Warren Central jumped out to a 14-0 lead early in the second quarter but did not score after that. Pearl took advantage of a bad punt snap to gain a short field and scored the go-ahead touchdown on a 4-yard run by Harrell with 28 seconds left in the fourth quarter to steal a 17-14 victory.

Morgan said there has been too much turnover on the roster to call this a revenge game, although he did point to the recent history between the teams as a good motivational tool.

“It’s almost like the Madison (Central) games. Going back several years it’s been close. We’ve been on the right side and the wrong side. It’s going to be a tough, physical football game,” Morgan said. “Getting tested is the biggest thing. It’s definitely one of the best offensive line and running backs in the state. It’s a big test. It’s early in the year. We’re still growing as a team and it’s a big test.”