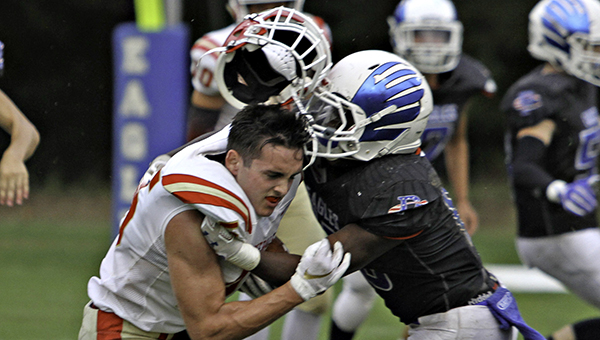 And now for something completely different.

After two weeks of training camp and two more of games, Porter’s Chapel Academy will take a two-week hiatus from its normal football schedule to play a pair of 8-man contests. The Eagles head to Deer Creek for the first one, Friday at 7 p.m., and will play at Claiborne Academy next week.

The two 8-man games are the result of an unbalanced schedule in the Mississippi Association of Independent Schools. There are 17 teams in Class 3A, the smallest 11-man classification, and 28 total in two 8-man classifications. The vast difference in size between 3A and 4A schools in the 11-man divisions required some crossover games between 8- and 11-man teams to maintain competitive balance.

Although odd, PCA coach Blake Purvis said the crossover games are a welcome respite for a small roster that has already taken some hits. PCA (0-2) has been outscored 82-7 in its first two games.

“I was all for it,” Purvis said. “I knew our depth was going to be an issue. Having a couple of games like this on the schedule gives you a little break if you have some injuries, and helps you rest some guys for later in the season. You like to play somebody with a similar-size roster as you. Deer Creek actually has more players than we do.”

The next two games are basically exhibitions for PCA. The results will count only toward the win-loss record of all the teams involved, and not toward the MAIS power point rankings that determine wild card playoff berths and seeding.

That takes some pressure off, but after two ugly losses the Eagles also want to gain some traction. They have less than 200 yards of total offense in their first two games.

“It’s the most important one because of the next one, but it does take some of the pressure off,” Purvis said. “We can still work on everything, so it’s still an opportunity for us to have some success and gain some confidence, and hopefully build off of it moving forward.”

One of the challenges PCA will face this week is installing new schemes on both sides of the ball. The school’s junior high team plays 8-man football, and a handful of those players are pulling double duty with the varsity, but none of the 11 upper classmen — about half the roster — have any experience with this variation of the game.

Eight-man football can resemble its more familiar 11-man cousin, but has some notable differences beyond the number of players on the field:

• The offense is required to have five players on the line of scrimmage instead of seven, but any player on the end of the line is an eligible receiver.

• Any player can wear any number, regardless of the position he plays.

The rules for linemen lead to a number of different styles in 8-man football. Some teams stick to traditional power running formations, while others like to spread the field and create space to take advantage of their speed. PCA, whose undersized linemen have struggled in the first two games, seems inclined to do the latter. Purvis, however, said it was important not to overthink things considering they’ll have to switch back to 11-man schemes for the rest of the season.

“It’s exciting. It’s something new. It helps with our depth. But it is stressful trying to overhaul the offense and defense in four days,” Purvis said. “The possibilities are really endless and that’s what we have to do, is not do too much with our limited time to prepare.”

Deer Creek is in its first season of 8-man football, but will have an advantage in this matchup. The Warriors have a slightly larger roster than PCA, and have also been playing 8-man for several years on the junior high level.

“They’ve had more reps than us and have been playing 8-man for several years in junior high. Some of their players have never played 11-man. So they should be more comfortable than us,” Purvis said.

Numbers and depth are a perpetual issue for PCA. There were only 21 players on the opening day roster. Purvis, however, said the crossover games this season and next will remain an oddity. There are no plans to move the program into the 8-man division on a permanent basis, he said.

“Our junior high numbers are up this year from the previous two years. We’ve got 17 or 18 junior high guys, primarily in the seventh and eighth grade,” Purvis said. “I hope that’s a sign of participation and numbers in the school picking up, as well as our ability to compete in 11-man for years to come.”