Class 3A Velma Jackson, Vicksburg High have a lot in common 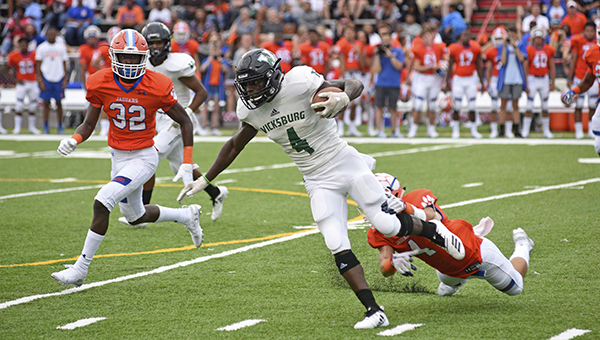 There wasn’t a lot of joy to be had in Vicksburg High’s season opener last week, a 42-0 drubbing at the hands of Class 6A powerhouse Madison Central in the Red Carpet Bowl.

The fun, VHS coach Tim Hughes said, came in the response to it. Rather than dwell on the loss, he said his players seemed determined to figure out how it happened and to learn from it.

“When we finished and got in the weight room the next day, it was a delight to see how serious they were taking it. Then in the film room, to see how focused they were on what actually happened to us,” Hughes said. “Last year, there was not a lot of X’s and O’s and strategies that were going to help us. It was just getting better at being football players. Not those details. It was a fun weekend, and it’s been a fun week, because we’ve gotten to focus on those details.”

How much the Gators have improved will be shown Friday night, when they go on the road to take on Velma Jackson (0-1). The Falcons are a Class 3A team, while Vicksburg is 5A, but Hughes said the two teams are on much more equal footing than that.

Each team has about 40 players on the varsity roster. Velma Jackson also has a better track record of recent success. It reached the Class 3A semifinals in 2016 and has a 28-9 record over the past three seasons.

“They have some kids that are going both ways and they do it at full speed,” Hughes said. “I know they are a lower classification, but when you look at the numbers that are out on the field, we’re a lot alike. We’re going to play us on that end of it. You’re going to see a team that plays with desire and everybody going in the same direction.”

One of the big keys for the Gators this week will be finding a way to generate more offense. They finished with 86 total yards against Madison Central and only had one snap on the plus side of the 50-yard line. An offsides penalty gave the Gators a first down at the Madison Central 45 late in the first quarter, and the next three plays lost a total of 14 yards before they punted.

Hughes said a lot of the struggles were a credit to Madison Central, which is a perennial Class 6A championship contender with a strong defense. The Jaguars simply outplayed Vicksburg most of the night.

Other facets of the game, however, will require tweaks not just to the offensive scheme but to overall strategy as well. Rather than running a high-tempo offense, for example, Hughes said the Gators might need to slow things down to give guys playing both offense and defense time to catch their breath.

Hughes didn’t expect as stern a challenge this week — perhaps no opponent left on the schedule will be as talented and deep as Madison Central was — and was eager to see how a week of adjustments and coaching turns out.

“I think it was a real good starting point. It was a team with the talent and the discipline that (Madison) had, and if we could step up to that challenge then it gets us closer to being where we want to be,” Hughes said. “The old adage is true, that there’s no greater improvement made than the improvement from Week 1 to Week 2. We got to see where a lot of improvement had to be made.”

ONLINE:
For live game updates on Friday night, follow us at facebook.com/thevicksburgpost and
twitter.com/vixpostsports