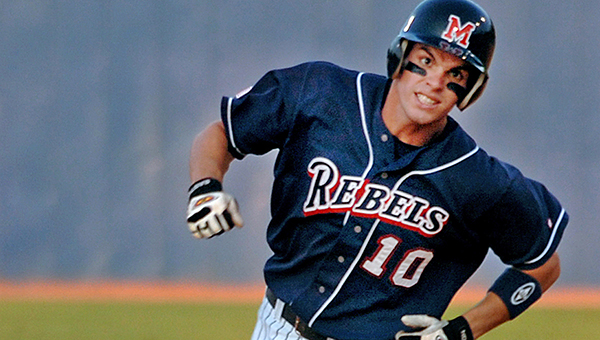 Justin Henry rounds second base while playing for Ole Miss in 2004. The former Vicksburg High baseball star will be among seven athletes inducted to the Vicksburg Warren School District Athletic Hall of Fame on Sept. 5. (File/The Vicksburg Post)

When he finished his football career at Vicksburg High School, Justin Henry was among the most accomplished quarterbacks in school history. He graduated as the school’s career passing yardage leader and led the Gators to the MHSAA Class 5A semifinals in 2001.

“It’s crazy looking back,” said Henry, who passed for 3,484 yards and 30 touchdowns between 2000 and 2002. “I played a lot of baseball games, and there’s nothing as fun as playing football on Friday nights.”

Henry might have had a future in football. He had some offers to play quarterback at a handful of small colleges. There was only one problem — he was a much better baseball player.

Henry wisely passed on those football offers to take a baseball scholarship at Ole Miss. He left football behind and put together a career that took him to great heights on the diamond. It was a career that continues to this day, and one that made him an early inductee to the Vicksburg Warren School District Athletic Hall of Fame.

Players are not eligible for induction until they are 15 years removed from high school. Henry graduated in 2003, meaning when he goes into the Hall on Sept. 5 he will do so in his second year of eligibility.

“It’s an awesome honor to find out I was selected. It’s a great group every year and I’m proud to be a part of it,” Henry said.

The Class of 2019 will be inducted Sept. 5 in a ceremony at the Vicksburg City Auditorium. Tickets are $20 and are available at the VWSD athletic office on Mission 66.
Henry grew up among a talented generation of baseball players. More than a half-dozen Warren County players who graduated between 1998 and 2006 played some level of professional baseball, and many others played in college.

“It was a great group, and it started at Halls Ferry (Park). A couple of teams won state championships at 12 and 13 years old, and everybody in town was really into it. We produced a lot of great players. It’s cool to look back now and see how many guys were going to Division I colleges,” Henry said.

Henry added that coaches and parents also played a large part in both his own success and that of so many players in that era.

“I was fortunate to have two great parents that let me play and took me to sporting events and supported me. And the same with my wife now. I wouldn’t have been able to do it without them,” Henry said. “I’m thankful for all the coaches at VHS and previous to that. (Football coach Alonzo) Stevens, (baseball coach Jamie) Creel and (basketball coach Dellie) Robinson. I gained a lot from each one of them. They were great leaders.”

Henry, a shortstop, was among the best players of his era. He was The Vicksburg Post’s Player of the Year in 2003 when he hit .456 and the Gators reached the second round of the Class 5A playoffs.

He said he knew early on that baseball, and not football, was the correct path to take.

“Baseball was my first love. I could take ground balls and hit in the cage for hours, and I loved the process of getting better,” Henry said. “Football was something I could have done, for sure, but I would have had to put on some weight. I was kind of skinny. It would have been a couple of years process.”

Instead, Henry made an impact right away with Ole Miss’ baseball team. He helped the Rebels reach the super regional round of the NCAA Tournament three consecutive seasons from 2005-07. In 2007 he tied the school record with eight triples and had 99 hits. The hits total is tied for third on the school’s single-season list.

Twelve years later, Henry’s .359 career batting average still ranks seventh on Ole Miss’ all-time list. He’s one of only two players in the top 10 to have played this century. Henry is also in the top 10 in several other offensive categories, either for a single season or career.

“We were the start of Ole Miss making that first step forward as a national program,” Henry said. “I said Friday night football was great, but Friday nights in the SEC are pretty awesome as well.”

Henry was selected in the ninth round of the 2007 Major League Baseball draft by the Detroit Tigers, and continued to excel in their minor league system. He steadily progressed up the ladder, was named the Player of the Year for Double-A Erie in 2011, and moved on to Triple-A Toledo the following year.

That was as far as he got, though.

Despite hitting .300 with Toledo in 2012, Henry never got a call-up to the majors. He was traded to the Boston Red Sox in December 2012 and spent two more years with their Triple-A affiliate in Pawtucket, Rhode Island, before retiring at the age of 29.

Henry admits he’s disappointed to have never gotten a chance in the big leagues, but said he’s proud of what he accomplished.

“I was able to play four years of Triple-A baseball. Part of me wishes I could get that call-up and say I was a big leaguer. But I was there. There’s no doubt in my mind I was at that level. God led me to that path and maybe I wouldn’t be in the game doing what I do now,” Henry said. “You can dwell on that and worry about it, but I don’t think about it often. I’m at peace with my career.”

Although his playing career was over, Henry’s retirement from baseball didn’t last long. In 2015 he took a job as an assistant coach with the Red Sox’s Class A affiliate in Greenville, South Carolina, and the following year was hired as an area scout by the Tigers. He’s been in the latter job ever since.

“It’s really great. I’ve loved sports my whole life. It’s what I watched on TV as a kid, and read about,” Henry said. “To be in this phase of my career, I don’t look at it as a job. I enjoy every single day of what I do.”