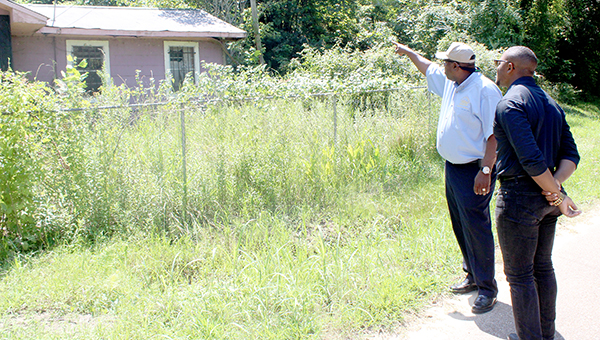 Some kind of vegetation is growing from the roof of a vacant home at 1218 Harrison St., and the grass in the yard is 3 feet tall and waving in the wind.

“Look at that,” North Ward Alderman Michael Mayfield said. “How could anyone let their property get like that?”

Mayfield looked at the house immediately to the south with its mowed and trimmed lawn, and pointed out the contrast. “This is what we want to see,” he said.

Mayfield spent part of Thursday touring the city with photographers from VTV, the city’s local access channel, photographing derelict homes and properties for a local program to get people to clean up their property.

The tour is another part of the battle Mayfield has been fighting since he’s been on the Board of Mayor and Aldermen. During the tour, Mayfield and the group documented vacant buildings with damaged roofs and windows, tall grass and weeds in the yards. One house had a fallen tree that damaged the roof and porch. “This isn’t even scratching the surface,” he said.

Looking at the condition of some properties on South Street, he said, “I grew up about two blocks from here, and at one time the homes on this street were immaculate.”

Derelict and dilapidated homes, overgrown properties with condemned buildings an inoperable cars are a continuous problem for the city. So far in 2019, Mayfield said, the city has handled 1,326 code enforcement violations where residents were forced to clean their property.

That number, he added, does not include state-owned property, which is property that is unclaimed after county tax sales and then acquired by the state. “When you include state property, it’s probably going to double,” he said.

And the problem is getting worse. Residents are calling the city’s Action Line and board members’ offices to complain about their neighbors.

Part of the problem, Mayfield said, may lie with the board’s policy of granting extensions to give people more time to clean their property and not checking on the property owner’s progress.

“It’s at the point now where we’re bombarded with calls about derelict properties; properties where you have several inoperable vehicles, overgrown lots,” Mayfield said. “They’re (residents) emailing; they’re calling, they’re asking us to come out and calling for inspectors.”

City ordinance requires property owners to keep their properties cut and clear of debris and their homes repaired. A violation results in a letter from the city ordering the property owner to clean the property or demolish the dilapidated building or the city will do it at the owner’s expense.

Once a violation is determined, the city sends a letter to the property owner giving them 30 days to clean the property or demolish the building, or attend a hearing on the problem held by the Board of Mayor and Aldermen.

Under city ordinance and state law, the city can use its employees or hire a contractor to demolish a building.

If the owner fails to pay, the city puts a lien on the property and the city gets its money when the house is sold. And the liens on some properties assessed by the city for cleaning multiple code violations are more than the actual value of the property.

As of April, Mayfield said, it has cost the city at least $400,000 to clean and clear property.

City officials try to work with property owners to either repair or sell the property or demolish the building themselves, and Mayfield believes the city’s willingness to compromise may be one reason for the problem with clearing derelict property and dilapidated homes.

“We’ve allowed people to take our kindness for a weakness for working with them,” he said. “We give them extensions, we give them reprieves, and they actually walk off thumbing their nose at us.”

He added residents he has talked to are growing tired of the problem.

“The people are upset about it. They want something done about what they have to live around,” he said. “I’ll say this loud and I’ll say this clear; it’s time for this board to act and that’s the bottom line.

“Once we give one extension, and if you haven’t improved your property, then we will act from that point to do what we need to do as far as taking you to court and having you fined, all the way up to demoing property that’s derelict.

“I’m just wondering how long I’m going to spin my wheels to get these people to do right,” he said.