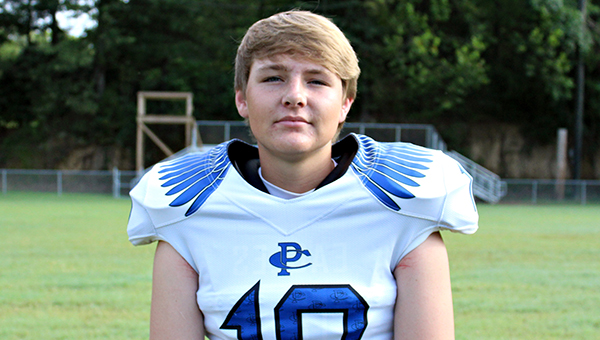 Porter’s Chapel Academy quarterback Luke Yocum threw for 135 yards and two touchdowns, and ran for another score in a 52-22 loss to Deer Creek on Friday.

In its first foray into the world of 8-man football, Porter’s Chapel Academy got ate up.
Deer Creek scored on a punt return and a fumble return, piled up 38 points in the first half, and went on to beat PCA 52-22 in an 8-man football game on Friday night.

PCA normally plays 11-man football, while Deer Creek is an 8-man team. The game was scheduled because of an imbalance in the number of teams in each division in the Mississippi Association of Independent Schools, and was played under 8-man rules.

PCA coach Blake Purvis said the switch made a big difference in the outcome. Deer Creek jumped out to a 38-14 lead by halftime.

“The 8-man was difficult. I think it took our guys a little while to get a feel for it defensively. It’s hard to simulate and it took a while to get a feel for fitting in holes and things like that,” Purvis said. “I thought we played better defensively in the second half. We gave up a punt return for a touchdown and that was purely an 8-man scheme. There’s a lot of field to cover.”

PCA’s 22 points were more than it had scored in its first two games combined. Quarterback Luke Yocum completed 7 of 12 passes for 135 yards and two touchdowns, with no interceptions, and also ran for a 1-yard touchdown.

Andrews also had nine tackles on defense, while Braden Kapp had five tackles and a fumble recovery.

“Offensively, we were doing some things that were working and then we had to do some things to score faster and it took us out of our game plan. In an 8-man game you can’t trade scores. You have to get stops,” Purvis said.

PCA will get one more chance at an 8-man victory next week, when it goes on the road to play Claiborne Academy.