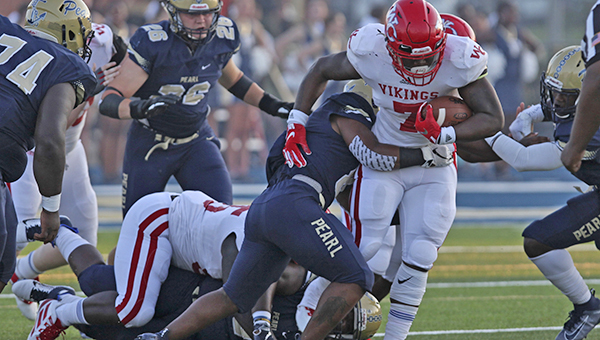 PEARL — Over the past four years, Warren Central and Pearl had played some classic games that went right down to the wire.

All-state running back Kenyatta Harrell rushed for 183 yards and two touchdowns, quarterback Gunnar Dennis threw for 121 yards and a touchdown in less than a half, and No. 4 Pearl handed Warren Central its worst loss in nine years, 42-0 on Friday night.

“Number one, they’re a very good football team. And number two, we’re still breaking in a bunch of young guys,” said Warren Central coach Josh Morgan, whose team has 18 new starters this season. “They outplayed us in all phases and really jumped on us early. We couldn’t seem to get our head up.”

It was a rare lopsided loss both in the series between these two longtime rivals, and for Warren Central in general. The last time the Vikings (1-1) lost a game by 40 points or more was a 49-7 defeat against Madison Central in 2010.

The last four games in the Pearl-WC series had been decided by a total of 20 points.

“With them, I’m very surprised (at the score), obviously. But in athletics sometimes that happens. That has nothing to do with them, and nothing to do with us. Sometimes that’s just the way the cookie crumbles,” Pearl coach John Perry said. “I’m sure they’re going to go back to work on Monday and forget all about it and win a lot of games this year.”

Nothing went right for Warren Central, from the first play to the last — which, coincidentally, were both sacks.

WC went three-and-out on both of its first two possessions, fumbled on the third, and punted after picking up one first down on the fourth.

Pearl (2-0), meanwhile, scored on its first three possessions and tacked on one more late in the second quarter to take a 28-0 lead into halftime. Harrell scored on runs of 4 and 12 yards in the first quarter, and Dennis hit Tre Davis III for a leaping 33-yard touchdown with 3:13 left.

Dennis left the game midway through the second quarter and did not return. He completed 8 of 13 passes for 121 yards and a touchdown.

Backup QB Shade Foster threw an 11-yard TD pass to Leo McIntyre with 2:47 left in the half, after Harrell carried the ball on eight consecutive plays.

Things didn’t get any better in the second half for the Vikings as they at least tried to keep the score respectable. A drive inside the Pearl 10-yard line in the third quarter ended in a fumble. Another reached the 19-yard line before a snap went over the head of backup quarterback Hartley Sullivan and short-circuited the momentum.

Pearl’s Derrick Watts also returned an interception 22 yards for a touchdown in the third quarter.

The Vikings’ final possession of the game was a 12-play march that got as far as the 16-yard line. Sullivan was sacked with 37 seconds left to force a turnover on downs.

Warren Central finished with 223 total yards, the exact same amount Pearl had in the first half.

“We’re still searching, and trying to find the right people. But we’ve got to get a lot better and tonight was a real eye-opener. That’s how we’ll use it,” Morgan said. “When you play good teams like this, you find out pretty quick exactly what you are. So we’ve got plenty to work on.”