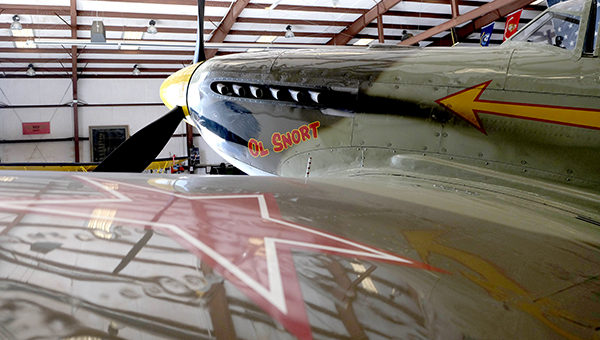 The Southern Heritage Air Foundation and Museum at Mound, La., has a new exhibit that stirs up the history of World War II’s Eastern Front.

The Foundation Thursday received delivery of a Russian Yakolev Yak-9U, one of a line of multipurpose Russian fighter-bombers used against Germany in World War II. The plane arrived Thursday afternoon at the Vicksburg-Tallulah Regional Airport, where the Foundation and museum are located.

“Denny Hickman of Gordo, Ala., has honored us as the recipient of one of his prized aircraft,” Dan Fordice, chairman of the Southern Heritage Air Foundation, said.

“This Russian Yak-9U is in flying condition and will be the perfect addition to the WWII and Vintage aircraft that the museum currently has. It will lend to our ‘living history’ section and be used for educational purposes, as well as flying air shows to support its expenses.”

Fordice said the The Yakovlev Yak-9 fighters became the most important element of the Soviet air arm in the final two years of World War II.

“The Yak-9 was the last of the series that began with the Yak-1 in 1942, and saw production totals in excess of 30,000,” Patty Mekus, president of the Southern Heritage Air Foundation, said.

She said the YAK is a reproduction of the original fighter. It was built in 2000 and based on the original 1945 plans for the plane.

“It’s built to the exact specifications of the 1945 plane,” Mekus said. “Its name is Ole Snort; it’s got a black boar painted on the side of it. From what we understand, the 9U was the last group built toward the end of 1945, and in 2000, they began replicating them.”

Getting the plane, Mekus said, “Is a huge shot in the arm for the museum because the way things are set up, we’ll probably keep it for two to three years, and then we’ll probably sell it, and that money will go to help us with our expansions and thing’s we’re looking to do.”

The donor, she said, “Knows that’s our plan.”

According to the military history website “Warbird Alley,” 16,769 Yak-9s were built during World War II at a plant east of the Ural Mountains, where manufacturer Alexander Yakovlev moved to escape destruction from the German Luftwaffe. The plant began production in 1942.

The single engine Yak-9 had a wide variety of armament for use in anti-tank, light bomber and long-range escort roles, and first saw combat during the Battle of Stalingrad. The plane had a maximum speed of 434 mph.