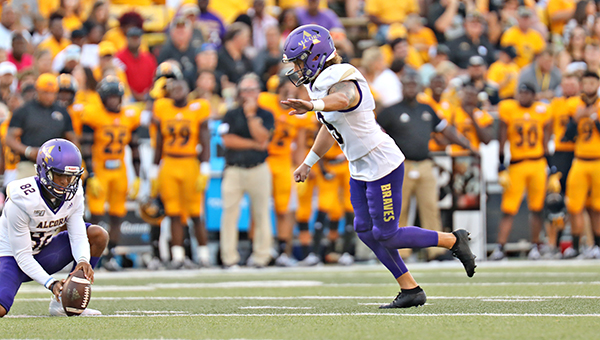 Welcome to Four Down Territory. Each week we’ll spotlight four nuggets, notes, facts and stats from the weekend that was in Mississippi high school football, college football and the NFL.

Special teams had a special day in Saturday’s season opener between Southern Miss and Alcorn State. Both teams had a host of highlights and milestones from their kickers and returnmen.

The list started, quite literally, with the opening kickoff. Southern Miss’ Jaylond Adams broke through a pack of defenders, up the middle and then down the right sideline for an 89-yard touchdown. It was USM’s first kickoff return for a touchdown since 2015.

In the fourth quarter, Adams added to his night by returning a punt 80 yards for a touchdown to put the capper on Southern Miss’ 38-10 victory.

Adams is the first USM player to return a kickoff and a punt for a touchdown in the same season since Tracy Lampley did it in 2009. It’s not known if he’s the first to do it in the same game.

“Without the guys on those units, it wouldn’t have been possible. It just felt great being back out there with those guys. Coming off a season-ending injury and to get into the end zone twice, it feels great,” said Adams, who missed all of last season with an injury.

Southern Miss kicker Andrew Stein also had a big night. He kicked three field goals — from 20, 19 and 24 yards — and ran in a two-point conversion after USM’s first offensive touchdown in the third quarter.

Stein took a direct snap from the Wildcat formation and ran into the end zone untouched to give the Golden Eagles a 21-7 lead.

Stein wasn’t the only kicker with a highlight, though. Alcorn’s Corey McCullough kicked a 44-yard field goal in the third quarter to set the school’s career record. It was McCullough’s 35th career field goal, pushing him past Wilfredo Rosales atop Alcorn’s career list.

“It was one of the goals I had when I signed to play at Alcorn. I wanted to break records and it felt good to get it out of the way in the first game,” McCullough said. “It was very important to me. My parents and I sat down before my career even started, and I talked about achieving greatness. I wanted to be one of the best to ever do it, and it’s just a blessing for me to accomplish this.”

The Flashes ran for 348 yards as a team and beat Greenville Christian 21-19 on Friday for their first win in the month of August since 2014.

This will mark only the third time in the last 15 years that St. Al will enter September with a winning percentage of .500 or above. It has not won a season opener since 2006, but has also won the second game of the year just twice since then.

Since 2004, St. Al has a 4-23 record in August. The win total does not include a forfeit victory over Adams County Christian School in 2018. ACCS won that game 40-0, but used an ineligible player and later had the result reversed.

The Mississippi junior college football season began with not one, but two major upsets on opening night.

The first was in Raymond, where Hinds Community College knocked off two-time defending NJCAA national champion and top-ranked East Mississippi 24-16. It was only the 14th loss in 11 seasons for East Mississippi under head coach Buddy Stephens.

Meanwhile, in Clarksdale, Coahoma Community College pulled off what might have been an even bigger shocker by beating No. 4 Jones College 18-10. Coahoma finished 0-9 in 2018, and Thursday’s win was only its sixth since the start of the 2012 season.

Like Hinds, the Tigers won with defense. They stopped two Jones drives on downs in the last five minutes — including the final one at the 23-yard line with 58 seconds left — and recovered a fumble inside the Jones 5-yard line to set up a touchdown. Jones only had 134 total yards.

4
The upset bug that started with junior college teams spread to the high school ranks on Friday night. Four teams in the Associated Press Overall top 10 poll lost, along with three of the seven teams ranked No. 1 in their respective classifications.

One of the biggest upsets was Class 5A No. 1 West Point’s 38-28 loss to Louisville, which itself is ranked No. 1 in Class 4A. West Point is the three-time defending Class 5A champion and had a 43-2 record over the past three seasons. Both of those losses came against Class 6A power Starkville.

In Class 6A, No. 3 Madison Central knocked off No. 1 Brandon 28-14 in a game that hardly classified as a major upset. Madison Central QB Jimmy Holiday ran for 223 yards and three touchdowns.

Also in Class 1A, No. 5 Simmons lost 22-12 to South Delta for its third consecutive loss after it had won 54 games in a row. Nanih Waiya and Simmons, which have played each other in the last two Class 1A championship games, are a combined 0-4 this season.