Martin-Glass’ life in basketball has been a series of highlights 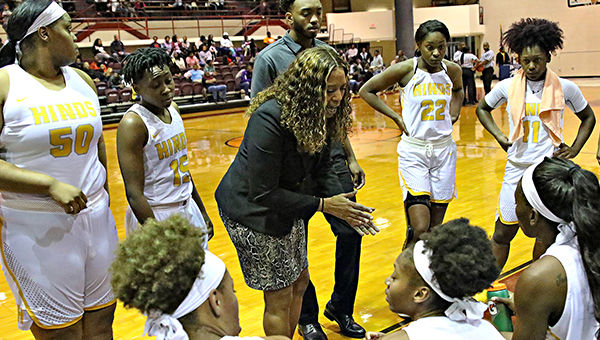 From the YMCA league in Vicksburg, to winning state championships at Warren Central, and then on to Ole Miss before embarking on a coaching career, Martin-Glass has had success at every level of the game.

“From the time I touched the ball in fourth grade, every team I’ve been on is a winning team. That’s why losing right now is not an option,” Martin-Glass said.

Martin-Glass is definitely winning. As she prepares for her second season as the head coach of Hinds Community College’s women’s basketball team, Martin-Glass will join six other Warren County sports legends in the Vicksburg Warren School District Athletic Hall of Fame’s Class of 2019.

Martin-Glass will be inducted at a ceremony Sept. 5 at the Vicksburg City Auditorium. Tickets are $20 and are available at the VWSD athletic office on Mission 66.

“For me it’s a humbling experience. I’m excited and grateful for induction,” Martin-Glass said. “It’s not about me. It’s about the people that helped me along the way, like coaches, parents and teammates. I thank all my teammates for trusting me.”

Martin-Glass grew up in a basketball family — both of her parents and all of her siblings played — and said it drilled a competitive fire into her at an early age. By the time she got to high school and joined an already-strong Warren Central program, she was ready to ascend to an even higher level.

Martin-Glass was the leading scorer for the Lady Vikes as they won the MHSAA Class 5A championship in 1986 and 1987. She was the Mississippi player of the year in 1987. The second state title, she said, also included one of her favorite moments in her career.

“I had the basketball on the baseline with 8 or 10 seconds left and the game was tied. Everybody was expecting me to take the shot, but for some reason I saw Bertha Smith and passed it to her. She was all alone in the lane, and she hit the shot,” Martin-Glass said. “I was willing to be unselfish and give it up. A lot of kids wouldn’t be willing to give it up. I shared the ball and we won the state championship.”

Martin-Glass’ playing career didn’t peak with those two state titles. She went on to Ole Miss and made the Southeastern Conference’s All-Freshman team in 1988, and was a first-team All-SEC pick in 1990. She led Ole Miss in steals and assists both years.

In 1992, she was named to the NCAA Tournament’s Mideast All-Region team when she led the Rebels to the Elite Eight. Along the way they finished 29-3 — with a 25-game winning streak — and won the SEC regular-season championship for the first time.

“It’s been a blessed, successful ride in basketball for me,” Martin-Glass said.

Martin-Glass’ playing career ended after the 1991-92 season, but she was far from done with basketball. She transitioned into coaching, both at the college and high school level, and has had success with it as well.

She eventually returned to Warren Central and, after five years as an assistant, ascended to the head coaching position in 2009. She stayed in that job for nine seasons, posted a 129-116 record, and was The Vicksburg Post’s Warren County Coach of the Year four times. Her teams went 78-44 over her last four seasons.

In 2018 she left Warren Central to take over Hinds’ program.

“When I finished (playing) sports, I never really wanted to leave,” Martin-Glass said. “I took my blessing as an opportunity to help other young ladies. It’s about helping other people be successful. That’s how I look at life. You can be an example for other people.”

Martin-Glass still has big goals. Hinds went 6-16 in her first season, but she feels the program will get better as she has a chance to recruit and build a reputation. Now 50 years old, she said she’d also like to keep moving up the coaching ladder in the years to come.