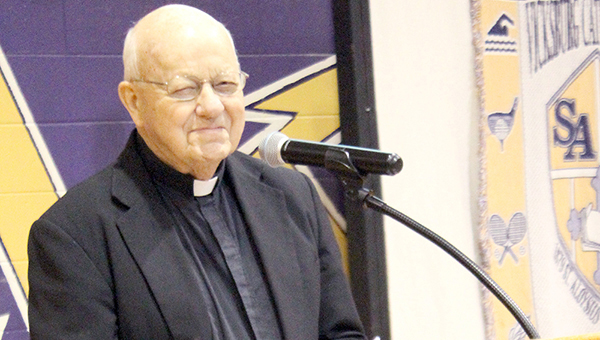 For more than 20 years, the Rev. Alfred Camp served as a teacher, principal and development director for St. Aloysius High School.

Thursday, Vicksburg Catholic Schools’ students, teachers, staff and alumni will remember Camp, who died Sunday in Madison, with a morning prayer service Friday at 7:45 a.m. at the St. Aloysius gym.

A funeral Mass will be said for Camp Sept. 11 at noon at St. Mary Basilica in Natchez.

Camp came to St. Aloysius as a teacher in 1968, and is remembered for having a passion for education and being a disciplinarian who was always available to students and faculty. He is most remembered, however, for keeping Catholic secondary education in Vicksburg in the wake of a 1977 fire that destroyed St. Aloysius.

“St. Aloysius would not be here today if it had not been for Father Camp,” said Jim Salmon, who was a student and teacher when Camp was principal. “We wouldn’t have Catholic high school education in Vicksburg without him.

“After the school burned, there was a meeting to discuss the future, and the great majority of the people wanted to rebuild, but the diocese, some of the leaders from the diocese, suggested we have the elementary and not rebuild St. Al, and Father Camp would not hear of it,” he said.

“He pretty much told them thanks for their advice but he would take care of it. He was not going to let St. Al close on his watch.”

“He was in every phase; there simply wouldn’t be a school without him.”

He called Camp “A principal’s principal. Father Camp was a man of his word. If he told you something, you could take it to the bank.

Salmon said Camp was very generous, and gave back most of his salary to school-sponsored charities and fundraisers. And while he was strict, students knew if they needed something or someone to talk to, they could go to him.

“He was very open, very helpful, and the kids knew it, too,” he said.

Lisa Reid, who was a student when Camp was principal, said he “touched all of us in many ways.

“He was definitely very much in charge as principal. He was firm and he could be quite stern if the situation called for it, but he also had a very wry sense of humor; he loved a good joke,” she said.

“He loved to teach and he was a good teacher, and he took a very special interest in students who were struggling; he seemed to know students who needed a firm hand, and I think it’s those students today who remember him most fondly — the ones he kept from really going off the tracks.”

Former St. Aloysius principal Buddy Strickland said he got to know Camp over time and became good friends with him.

“You knew who he was; you knew what kind of a man he was and what he stood for,” he said. “The four years that I was at St. Aloysius, he would call me on the feast day of St. Aloysius every year and talk with me.”

Strickland said he last visited Camp about a month ago.

“He still had a quick tongue and he was really doing well. He was sitting up reading the newspaper,” Strickland said. “I had probably a 20-minute visit with him. He was a remarkable man.”