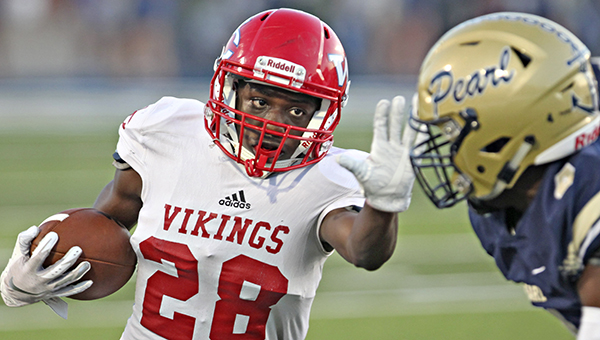 Mathematically speaking, if a football team plays enough games over the span of enough years, a few of them are bound to be lopsided losses.

When it happens, though, it can still be difficult to stomach.

Warren Central is preparing this week to face crosstown foe Vicksburg High in the annual River City Rivalry game Friday at Viking Stadium. As big a goal as maintaining local bragging rights for the Vikings is setting aside a humbling 42-0 loss to Pearl last week and regaining some of its shaken confidence.

“The first thing we talked about is fixing our mistakes and getting better at being us. A big game like this helps echo that message,” Warren Central head coach Josh Morgan said. “The next game is going to be important regardless, because it’s a chance to see how we respond. With it being Vicksburg week, it’s that much more important.”

Losing to Pearl, the No. 2-ranked team in MHSAA Class 6A, was nothing for Warren Central to be ashamed of. What was alarming was the way it unfolded.

Pearl scored on each of its first three possessions, returned an interception for a touchdown in the second half, and forced four turnovers. All-state running back Kenyatta Harrell ran for 183 yards and two touchdowns despite sitting out the fourth quarter.

It was the kind of one-sided, dominating loss that has become rare for Warren Central. The last time it lost a game by 40 or more points was Oct. 8, 2010, when it lost 49-7 to Madison Central in Morgan’s first season.

“We didn’t help ourselves any,” Morgan said. “Any time you turn the ball over four times and don’t create any turnovers, you’re not going to beat anybody. Pearl is a great football team, but we made them look a lot better than they are. We can help ourselves. We can coach better and we can play better, and that includes myself.”

Playing Vicksburg, at least in recent years, has seemed to help the Vikings pick themselves up off the mat. Warren Central has won seven consecutive games in the series. Four of those came after it lost the previous week, including each of the past two years.

The winning streak has helped Warren Central reassert its dominance in a series that had become much more even in the 2000s. After Warren Central won 24 of the first 26 meetings, Vicksburg won six of seven — including five in a row — from 2005-11.

Warren Central still leads the series, which started in 1981, by a 30-8 margin.
Morgan picked his words carefully when asked for the reason behind the swing back toward his team.

“Whether it’s by happenstance or consistency — I know they’ve had a few different coaches over there — I don’t really know how to answer that,” he said with a slight grin.

Even if Warren Central has regained the upper hand in the series, Morgan was complimentary of the current iteration of the Gators. They’re coming off a 19-14 win over Velma Jackson that injected a shot of confidence.

“They’re fundamentally sound across the board. They play really hard and you can tell they’re well-coached and playing together as a team,” Morgan said. “They’re always going to be dangerous. Confidence is a big part in anything you do. They have our full attention for sure.”