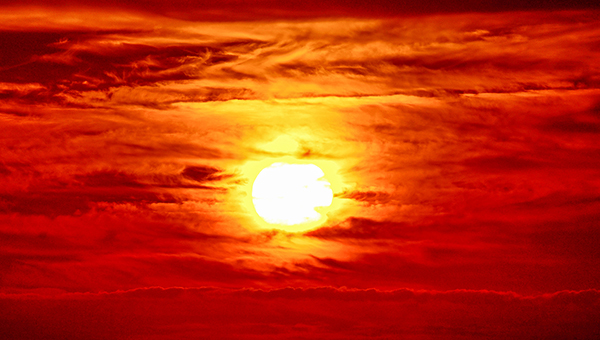 Triple-digit heat is possible for the Warren County area over the upcoming weekend.

Just when it seemed cooler temperatures may be just over the horizon, Warren County and Vicksburg are going back into the furnace.

An area of high pressure is forecast to move over the area this weekend and settling in for next week, bringing high temperatures and no rainfall, said Anna Wolverton, a meteorologist with the National Weather Service Office in Jackson.

“Going into this weekend, high temperatures will be 99 to 100 degrees, and heat indexes will be topping out between 100 and 105,” Wolverton said.

The high-pressure system, she said, will be a dry air mass, meaning low humidity.

“It will be kind of a dry heat and therefore heat indexes won’t be that high, but still hot enough,” Wolverton said, adding temperatures for the next week will be in the upper 90s with dry heat.

And that means people will have to continue being concerned about heat-related illness.

Kim Kilpatrick, nurse practitioner at the Merit Health Medical Group clinic on Mission 66, recommends that if at all possible, prolonged exposure to high temperatures should be avoided or frequent rest breaks taken when avoidance is not an option.

“Drinking lots of fluids and maintaining hydration is vital in reducing the frequency and severity of the more significant forms of heat illness,” she said.

Kilpatrick said those who are most at risk for classic heatstroke, such as the elderly and chronically ill, should be monitored to assure they are getting enough fluids and that they are in a safe and climate-controlled environment.

According to the medical website WebMD, the symptoms of heatstroke include:

If a person is suspected to have heatstroke, immediately call 911 or take them to a hospital. Any delay seeking medical help can be fatal.

While waiting for the paramedics to arrive, initiate first aid. Move the person to an air-conditioned environment — or at least a cool, shady area — and remove any unnecessary clothing.