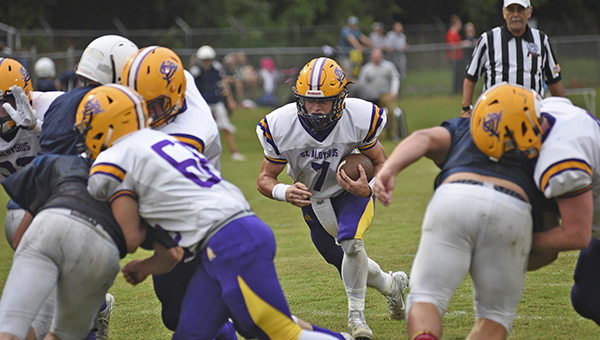 Framed one way, St. Aloysius’ passing game has been remarkably efficient this season. Every one of the Flashes’ completions has gone for a touchdown.

Framed a different way, it just shows how effective the Flashes’ running game has been.
St. Al has only completed two of its 10 passes for a total of 10 yards — two 5-yard touchdown passes. One of them was a halfback pass. On the ground, they’ve run for 413 yards on 78 carries. Most of that yardage came last week, when the Flashes totaled 348 rushing yards and beat Greenville Christian 21-19.

Alvin Brown ran for 214 yards and two touchdowns, while quarterback Phillip Upshaw had 134 yards in the win.

“We’re kind of young at the receiver position, so we’re still in the learning process in our passing game,” Fields said. “One thing we do, is we’re going to take what you give us. The other night they were blitzing us from everywhere and we ran right at them. It takes so much pressure off you if you can run the football. The team that can run the football usually controls the game.”

Control is a big storyline this week as St. Al (1-1) heads into its District 3-5A opener against Central Hinds (0-2). The winner will be set up to play for higher stakes in a few weeks when the bulk of the district schedule hits, while the loser will be playing from behind in the standings.

Central Hinds finished 10-2 last season, but has a new coach in Steve Pruett and a number of new starters. It has been outscored 82-22 in its first two games.

“They had a lot of graduation, so we might be the more seasoned team right now,” Fields said, adding he was glad to face a retooling team early in the season. “It helps a lot, because that’s been some of our problem the last few years. We’ve been a team that’s been better as the season gets later. One thing that’s for sure, is we have to slap them in the mouth early. We can’t let them get any confidence.”

Confidence is another reason this is a pivotal game for St. Al. The program has a 4-23 record in August since 2004, and has not entered September with a .500 record since 2014.
Putting together a winning streak and building on some rare summer success could have a big effect on the rest of the season, Fields said.

“We harp on this all the time. It’s a district game, and it’s the closest school to us so it’s kind of a rivalry,” Fields said. “We’ve been so slow getting started that we can’t think we won one and got lucky. We’ve got to string a few together.”

Foundation laid in Vicksburg led James Jones to the NFL

James Jones played college football at Mississippi State, and then six years in the NFL with the Dallas Cowboys for... read more