Foundation laid in Vicksburg led James Jones to the NFL 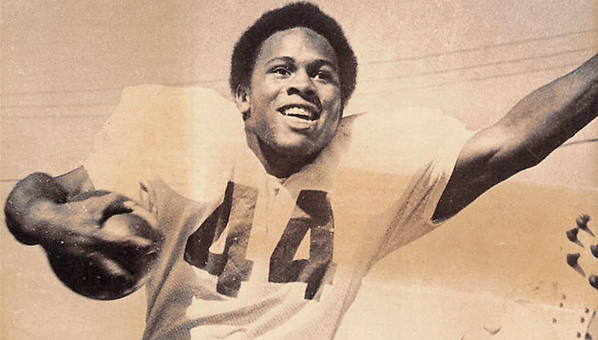 Former Vicksburg High running back James Jones is one of seven athletes who will be inducted to the Vicksburg Warren School District Athletic Hall of Fame Thursday night. Jones went on to play at Mississippi State and in the NFL with the Dallas Cowboys. (File/The Vicksburg Post)

James Jones played college football at Mississippi State, and then six years in the NFL with the Dallas Cowboys for legendary head coach Tom Landry. On three separate occasions he was one game away from playing in the Super Bowl, and still holds a unique Cowboys franchise record.

On one level, he says, that was one of the easiest things he did in his career.

“From a conditioning standpoint, (the NFL) was probably a step down from high school,” Jones said. “Coach (Cardell) Jones had us in shape for football and track. Conditioning was a 12-month process, and that foundation let you know what commitment really meant.”

The foundation Jones laid down at Vicksburg High School carried him to great heights in the football world and, eventually, to the hall of fame. Jones will be one of seven Warren County sports legends enshrined in the Vicksburg Warren School District Athletic Hall of Fame Thursday at 6 p.m. at the Vicksburg City Auditorium.

“It’s always great to be recognized. I don’t know anybody that doesn’t like to be recognized,” Jones said with a chuckle. “In Vicksburg we’ve always had a deep tradition, and it’s important to be a part of it.”

Jones said he was especially excited to enter the Hall of Fame with Sweet. The two played together for one season at VHS in 1973.

Sweet was a running back and receiver who went on to lead Ole Miss in rushing in 1975 and 1976, before a knee injury ended a promising career.

At VHS Sweet caught 44 passes for 862 yards and 11 touchdowns while helping the Gators to the Big 8 championship in 1973. His totals stood as Warren County single-season records for 24 years.

“Michael was a player I had the utmost respect for,” Jones said. “It means a lot to go in with Michael. I have a lot of respect for him as a person and as a running back.”

Jones, of course, was a great running back in his own right. He rushed for 2,730 yards and 30 touchdowns in three varsity seasons at Vicksburg High from 1973-75, and was a dual threat with 52 career receptions for 962 yards and 10 touchdowns.

He continued that trend at Mississippi State, where he ranked seventh in the country with 13 touchdowns — 10 rushing and three receiving — in 1978 while playing in a run-heavy offense. His 162 rushing yards in a 16-14 win over LSU that season was the third-highest single-game total in MSU history at the time.

Jones missed the second half of the 1979 season after suffering a knee injury against Tennessee, but was still drafted in the third round of the 1980 NFL draft by the Cowboys.

He was supposed to be the primary backup to Hall of Fame running back Tony Dorsett, but only wound up carrying the ball 62 times in the next six seasons. Instead, he carved out a niche as a punt and kick returner and earned a footnote in the Cowboys’ storied history.

In Jones’ rookie season in 1980 he returned 54 punts for 548 yards. Those numbers still stand, 39 years later, as single-season franchise records.

“It was interesting. I didn’t return punts in college at all,” Jones said. “You try to provide value to a team any way you can. That’s pretty impressive considering the elite returners they’ve had since then.”

Jones and the Cowboys came agonizingly close to another form of history. They reached the NFC championship game in 1980, 1981 and 1982 only to lose to all three times. In 1981, they were on the wrong end of the famous touchdown pass from Joe Montana to Dwight Clark with a minute left that propelled the San Francisco 49ers to the first of four Super Bowl titles and became known as “The Catch.”

“That bothered me for a few years. Seeing The Catch brings back bad memories,” Jones said.

The Cowboys’ dynasty petered out after their 31-17 loss to the Washington Redskins in the 1982 NFC championship game. It would be another decade before the franchise rebuilt itself into a Super Bowl winner, and by then Jones was long gone.

Jones had two more knee operations while in the NFL. One knee injury forced him to miss the entire 1983 season and half of 1984. He returned in 1985, but retired before the start of training camp in 1986.

After football he went to work for cyber security company McAfee and has been with them for nearly 30 years.

When it comes to football, Jones said he tries to think about what was and not what might have been.

“I look at it from the perspective that I had the opportunity to play at the highest level for six years,” Jones said. “I guess the thing I’m most proud of with the Cowboys is being part of an organization with a coach like Tom Landry and guys I played with and built great relationships with during that time. I’ve been in ‘Corporate America’ for the better part of 30 years and I’ve seen the things that are required to be a success were things I was taught back then. Being a part of that helped.”

And all of it, he added, built upon what he learned back home in Vicksburg.

VWSD HALL OF FAME
• The 2019 Vicksburg Warren School District Athletic Hall of Fame induction ceremony is Thursday at 6 p.m. at the Vicksburg City Auditorium. Tickets are $20, and are available at the VWSD athletic office on Mission 66 or at the door.
• The 2019 Hall of Fame class will be recognized during the Vicksburg vs. Warren Central football game Friday at 7 p.m. at WC’s Viking Stadium.