Gators can build on success when they face rival Warren Central 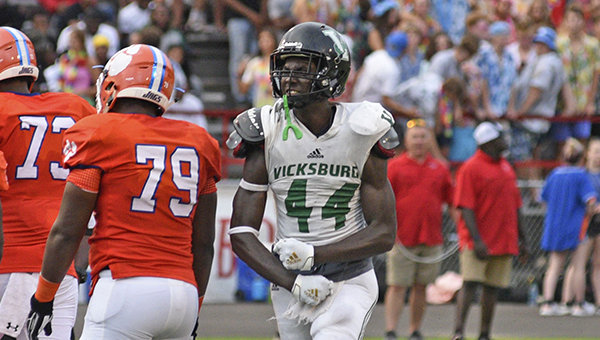 Years ago, when it was a region game with all sorts of implications for playoff berths and momentum heading into the postseason, the annual Vicksburg vs. Warren Central rivalry game was pivotal for a number of reasons.

These days, the game is played in Week 3 in early September and has a lot less importance in the grand scheme of things. No matter who wins or loses, it won’t have a lasting effect on either team with eight more games to follow.

For Vicksburg, however, it’s still coming at a pivotal moment.

The Gators (1-1) notched their first win of the season last week by beating Velma Jackson 19-14. Adding a victory over their crosstown rival would be another shot of adrenaline, and just playing the Vikings (1-1) is both an opportunity and a tool to build on the recent success, head coach Tim Hughes said.

“I think it’s extremely pivotal, and it’s got nothing to do with us playing Warren Central this week. Just the fact we’re playing Warren Central means we get to have our kids extremely focused, and that’s a good thing,” Hughes said. “What we get to do is create a habit. Whether it’s having a great attitude, giving a good effort, it’s all a habit. If you decide you’re going to have a great attitude and give a good effort at practice, then next week it’s easier to do that. Winning is the same way. When you find a way to win a ballgame, and find a way not to lose, then all of a sudden that next week winning seems like it’s the natural thing to do. It’s a habit.”

Last week’s win snapped a five-game August losing streak for the Gators that dated to 2017 and featured a couple of impressive performances.

Just as impressively, the Gators weathered a blizzard of 20 penalty flags that erased several third down defensive stops and a couple of big offensive plays. They nearly let a 19-0 lead slip away before putting the clamps on Velma Jackson’s comeback late in the fourth quarter. The way they handled that level of adversity, Hughes said, showed the team’s growth.

“What was awesome to see was that kids didn’t bicker about it. They understood we were at somebody else’s house and they understood that situation. That was even the language they had on the sideline, was, ‘It doesn’t matter. We’re still going to go prevail,’” Hughes said. “It was fun to see that happening just out of maturity. There was a time last year when if cards started falling and the snowball gets rolling, there was no stopping it.”

The next challenge is ending another losing streak that has gone on way too long for their liking. Warren Central has won seven consecutive games in the River City Rivalry series and held the Gators to seven points or less in four of the last five meetings.

Warren Central is coming into this game on the heels of a 42-0 blowout loss to Pearl that was its worst defeat since 2010. Even though his team is on the opposite end of the emotional spectrum with its win last week, Hughes was careful not to underestimate the Vikings. As a former VHS player and longtime assistant coach before he got the head coaching job last year, Hughes said he’s seen too much in this series over the years to ever think anything will be easy.

“There’s no vulnerability. There’s years where we had no wins and they had one win and it was still going to be a very intense football game. The emotions are going to do that,” Hughes said. “There’s a reason they’re always playing in November. There’s a reason they’re always finding a way, even when they don’t have the studded up teams, they still have the success that they have. They’re very good at what they do. If anything, on their part, this gives their coaches and kids a sense that it’s time to make some changes and redirect. I’m sure their focus has been laser sharp this week.”

One other thing Hughes said he has learned over the years is what not to do when it’s time to face Warren Central. Many times, he said, an overemphasis on the game has led coaches and players to put in new wrinkles that didn’t work very well.

These Gators, Hughes said, will have some new formations and plays for this week, but that’s simply because it’s early in the season and they haven’t been used yet. The goal is to build on what they’re doing and been successful with, and not overhaul the entire system for what is, ultimately, one game of 11 on the schedule.

“We still haven’t, and a lot of teams haven’t, installed everything yet. So it’s a little different now in that there are things we have to get in, and when we play certain formations and things and see some of the things we need to do, we’ll install that,” Hughes said. “It’s not a reboot. It’s not going to be something completely different we haven’t been working on. It’s all within the system.

“What I don’t want to do is look at the kids and say this is a brand new reboot. It’s something new and different,” he continued. “Because a lot of times what your players end up hearing is what we weren’t doing wasn’t good enough and let’s go do something else. The other part is you work on for a week something you end up being mediocre at, when you could have stayed doing what you’ve been doing for the last six weeks and be a whole lot more sound with it.”