PCA gears up for another 8-man game 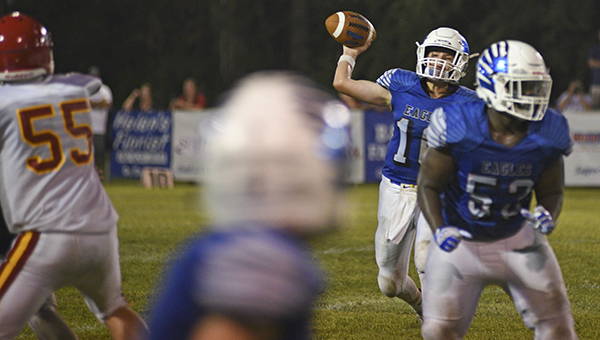 With a full season to implement full offensive and defensive schemes, and to coach his players on the finer points of the game, coach Blake Purvis thinks Porter’s Chapel Academy could do pretty well in 8-man football.

Unfortunately, the Eagles only have one more shot at it.

PCA (0-3) will go on the road Friday to play Claiborne Academy (1-1) in the second of two back-to-back 8-man games, before they resume the regular part of their schedule.
PCA’s first 8-man game resulted in a 52-22 loss to Deer Creek, which Purvis chalked up in part to adjusting on the fly to a different style of football.

“As with anything, reps are very important. We have to get better with our run fits. It’s just so much different. You see a lot more exotic formations — not exotic to 8-man, but exotic to what we’re used to seeing. We have to get better with that and have a better feel for the game,” Purvis said. “When you’re used to having three more guys on defense and you funnel somebody to a linebacker that’s now not there, it’s pretty difficult.”

Although it gave up more than 50 points for the second game in a row — a total that’s not uncommon in 8-man football — there were some positives to be found for PCA last week.

Its offense scored 22 points, three times its total from the first two games combined. Quarterback Luke Yocum threw two touchdown passes and ran for another, while Tyler Washington and John Michael Wilkerson caught TD passes. The individual performances and efforts, Purvis said, were a marked improvement from the previous week’s 54-7 drubbing at the hands of Newton Academy.

“Outside of the scheme and anything like that, we had some nice plays. Spencer (Azlin) and John Michael (Wilkerson) both made outstanding grabs going up and using their height to catch balls,” Purvis said. “I thought we blocked better than we had, and when Luke had time he threw the ball well. There were some things that were good. We were just limited by the scheme, no doubt.”

For one more week, however, the Eagles will have to figure out the nuances of the 8-man game and a way to beat a decent opponent.

Claiborne is young — there is only one junior and one senior on the roster — but is coming off a 50-0 rout of Rebul Academy last week. Purvis said Claiborne’s youth is not quite indicative of its skill level.

“They have all the pieces you need to be successful in 8-man. They have some size and physicality in their linemen, and some speed. (Senior running back Daniel Smith) lines up all over the place for them and he’s definitely one we’re going to have to stop,” Purvis said.

PCA’s 8-man experience will end after Friday’s game. It goes on the road to play CHEF, a home school team in Baton Rouge, next week and the rest of its games are of the 11-man variety. One thing Purvis said he and the Eagles have learned from these two weeks is to have a healthy respect for 8-man teams.

“Eight-man is not small schools and bad teams or anything like that,” he said. “It’s a different brand of football, but there are still good football teams in 8-man. Those teams have found a niche and it’s definitely good football.”