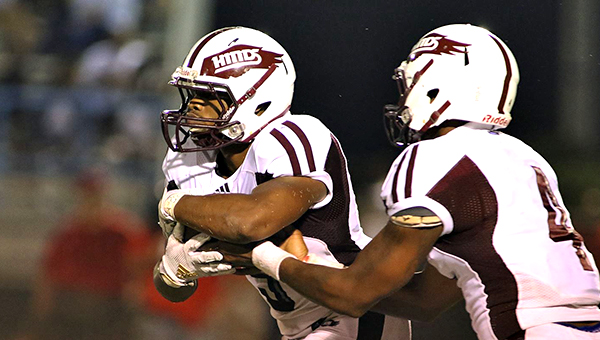 MOORHEAD — Hinds Community College was a little sluggish coming off its big season-opening win over No. 1 East Mississippi, but still found a way to get the job done Thursday night.

“We didn’t play up to our level or expectations tonight. I thought we were a little sluggish, but we made some plays when we needed to,” Hinds head coach Larry Williams said. “As always we need to keep moving forward and continue to get better every day.”

The teams combined for three field goals in the first half, then quickly traded touchdowns. After Elijah Walker threw a 41-yard TD pass to Jakarius Caston to give Hinds a 12-3 lead, Mississippi Delta answered with a 70-yard kickoff return touchdown by Su’Metris Stewart with six seconds left in the half.

Ragsdale’s 5-yard TD run with 12:11 left in the fourth quarter put Hinds back in front 19-10. Mississippi Delta cut it to two points on a 4-yard pass from Jordan Gilleylen to Lebarron Jones with 5:37 to go, but Hinds was able to keep the ball the rest of the way and run out the clock.

Walker finished 12-of-20 passing for 190 yards and one touchdown for Hinds. Jonathan Jordan had three tackles and one interception on defense.

Gilleylen finished 18-of-27 for 189 yards, one touchdown and one interception through the air for Mississippi Delta (0-2). Jones was his main target, as the sophomore wide receiver had 12 catches for 91 yards and one touchdown.

Hinds will go on the road next Thursday to play Jones College at 7 p.m. in Ellisville.

One of Holman’s touchdowns was a 34-yarder to former Vicksburg High star Joshua Pedyfoot in the second quarter.

Jones 23, Holmes 7
Former Warren Central star Fred Barnum completed 17 of 22 passes for 144 yards and two touchdowns to lead No. 17 Jones College (1-1) past Holmes Community College (0-2).
Both of Barnum’s TD passes went to Bud Tolbert, for 18 yards in the first quarter and 4 yards in the fourth.

Lance Stewart ran for 101 yards and one touchdown, and Khalil Levy caught four passes fo 123 yards and a TD for Pearl River (1-1).

After Northeast scored on an 8-yard pass from Jack Mangel to Carson Banks with 13:25 left in the game, Co-Lin struck back. Clark hit Heath for a 55-yard touchdown pass with 9:07 left to make it 14-7.

Wheat added another interception with 3:37 remaining and Co-Lin hung on for the victory.

Coahoma (1-1) pulled off one of the biggest upsets in recent junior college history last week by stunning then-No. 4 Jones 18-10. Gulf Coast, however, scored three times in the first 10 minutes to take a 20-0 lead and was never threatened.

The Bulldogs (2-0) held Coahoma to less than 100 yards of total offense, and minus-20 yards rushing. The defense forced two turnovers and had four sacks.

De Mays and Dee Rule each had three tackles and an interception to lead Northwest’s defense, which held Southwest to 144 total yards.

Zarious Keyes led Southwest Mississippi with 64 rushing yards and one touchdown. Bears quarterbacks Keyont Baines and Ja’Tyler Moore were a combined 5-of-22 passing for 116 yards, with two interceptions, and were sacked three times.