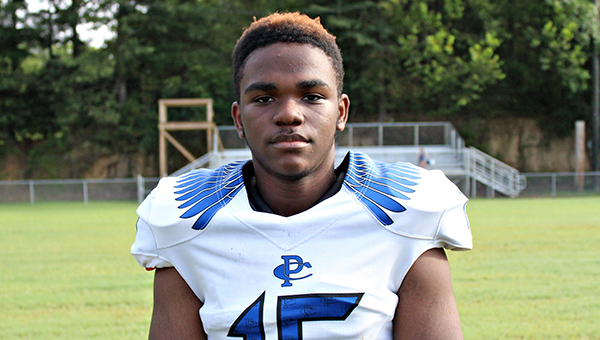 Porter’s Chapel Academy running back Tyler Washington ran for a season-high 120 yards and two touchdowns, including the go-ahead score with less than two minutes left, as the Eagles beat Claiborne Academy 32-22 on Friday.

Enough with the 8-man. Porter’s Chapel Academy is just happy to celebrate a win.

Tyler Washington ran 10 yards for the go-ahead touchdown with less than two minutes remaining, and Kainen Powell returned a fumble 62 yards for the clinching score about a minute later as PCA beat Claiborne Academy 32-22 on Friday night.

PCA (1-3) earned its first win of the season in the second of two back-to-back 8-man games. It will return to its normal 11-man schedule next week, on the road against Baton Rouge home school outfit CHEF.

“I think everybody’s real happy. It was good,” Porter’s Chapel coach Blake Purvis said. “It was even better to show the fight. Scoring three times in the last seven minutes was huge for us.”

PCA snapped a 10-game losing streak and won for the first time since Aug. 31 of last year with a stirring second-half comeback.

Trailing 22-12 with about seven minutes left, PCA faced a fourth-and-25 in its own territory. It got a pass interference call to move the ball 15 yards, but under high school rules that penalty is not an automatic first down so it remained fourth-and-long. On the ensuing play, Luke Yocum threw a 47-yard touchdown pass to Michael Tod Andrews to cut it to 22-18.

Then, with 1:30 left, Washington scored his second touchdown of the game to give the Eagles a 24-22 lead. John Michael Wilkerson added a two-point conversion run.

Washington finished with a season-high 120 rushing yards and two touchdowns on 18 carries.

Claiborne got the ball back and quickly moved down the field. On second down from the PCA 21, Wilkerson sacked the Rebels’ quarterback and forced a fumble. Powell scooped it up and ran to the end zone to make it 32-22 with 38 seconds to go.

“It’s fun now. It wasn’t fun while it was going on when you’ve got to come up with stop after stop and then score after that,” Purvis laughed about the stress of the comeback. “In the end, it definitely feels good. The fight we showed all the way down the stretch was a positive. With an 0-3 team in that situation it would have been very easy to give up.”

Yocum finished 5-of-8 passing for 182 yards and two touchdowns for PCA. Andrews caught three passes for 180 yards and two TDs — his 47-yarder in the fourth quarter and a 75-yarder earlier in the game — and also had eight tackles on defense.