St. Al shuts out Central Hinds in District 3-5A opener 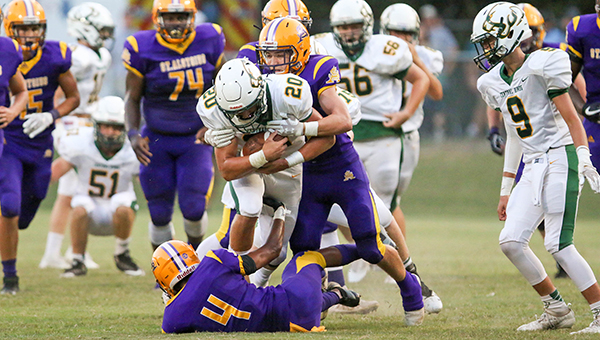 WRAPPED UP: Central Hinds running back collin Hautle (20) is tackled by St. Aloysius’ James Davis (4) and Kieran Therriot in the first half of Friday’s game. St. Al won, 13-0. (Walter Frazier/For The Vicksburg Post)

St. Aloysius put in a good night’s work and got home in time to get a good night’s rest.
Alvin Brown ran for 112 yards and a touchdown, quarterback Phillip Upshaw added 72 yards and a score, and the Flashes beat Central Hinds 13-0 Friday in their MAIS District 3-5A opener at Balzli Field.

The game was finished in a little more than two hours as both teams relied heavily on the run and kept the clock moving. St. Al (2-1, 1-0 District 3-5A) won its second in a row by recording just its second shutout since 2010.
Central Hinds’ record dropped to 0-3.

“We left a lot of stuff on the table. We missed a lot of opportunities to get turnovers. We had some balls on the ground and didn’t get to them. But we rose to the occasion,” St. Al coach Michael Fields said. “A win is a win is a win, and we got out of there with a win and we’re happy about it.”

Upshaw scored St. Al’s first touchdown, on a 1-yard run late in the first quarter. Brown found the end zone on a 37-yard run on the final play of the third, and Kieran Theriot added the PAT for a 13-0 lead.

“One thing about it, when you can win a game you’re supposed to win that’s when you know things are going in the right direction,” Fields said. “We had a total team effort. Our depth is a lot better and we were able to play a full four quarters of football.”

The Flashes will get a stern test next week when they go on the road to play Class 6A Parklane Academy (2-1), which was ranked No. 5 in the Associated Press’ MAIS poll this week. Parklane lost 41-40 to Presbyterian Christian on Friday.

Fields said the physical opponents the Flashes have faced so far should help prepare them for what’s ahead.

“They’re going to be tough. They’re going to ground and pound,” Fields said. “Their physicality won’t be anything to surprise us. We just have to rise to the occasion and play to the end.”