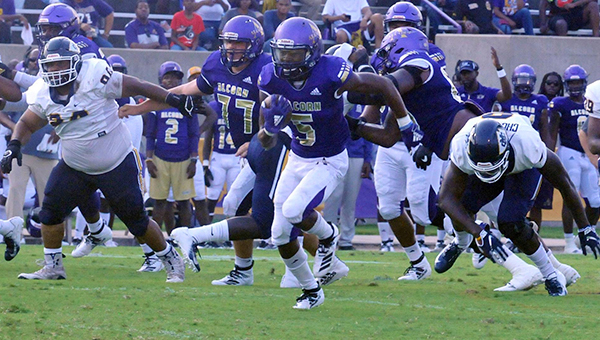 Prior to kickoff, Alcorn State honored members of its 1969 championship team that was crowned Black National Champions and Southwestern Conference champions while posting an 8-0-1 record.

“Coming out for this ballgame, the purpose was to execute, play fast on defense and make sure we do all the right things on special teams. The offense came out and we sputtered a bit on the opening kickoff. We got the ball first and went three-and-out, I really hated that,” Alcorn head coach Fred McNair said. “The defense played excellent in the first half. Still, we didn’t execute the way we wanted to offensively especially coming out in the second half with a 28-point lead. We wanted to build on that, but did some things out of character. Those are the types of things we need to work on this week.

Alcorn State rolled to 324 yards rushing, with the freshman Duffey leading the way with 138 yards on 13 carries.

Duffey opened the scoring by capping a seven-play, 64-yard opening drive with a 29-yard run. After Jonathon Bolton’s short run for a score Duffey raced 45 yards to make it 21-0 after one quarter. Duffey’s 26-yard touchdown catch from Noah Johnson capped the Braves’ scoring.

Minter racked up 189 yards on 16 carries for the Jaguars (1-1), including a 49-yard scoring run late in the first quarter. Cephus Johnson threw for 120 yards and a touchdown and ran for another score.

South Alabama led 13-7 after Minter’s TD run when Johnson threw a short touchdown pass to Kawaan Baker with seconds to go in the first half and the Jaguars led 19-7 at halftime.

Minter ran for his second touchdown late in the third, but the two-point conversion failed, leaving it at 25-7 with 5:36 to play in the quarter.

Jackson State scored a touchdown late in the first quarter on a 6-yard pass from Derrick Ponder to Newman but did not score again until late in the fourth when Tyson Alexander squeezed one more in on a 30-yard run with 5:22 to play.

Ponder finished with 123 yards passing for the Tigers (0-2).

It was Giffen’s third field goal of the night as his earlier kicks of 22 and 39 yards kept the Cardinals in the game. Giffen tied the game 13-13 with his 39-yarder with 5:39 left in the fourth. Mississippi Valley State quickly responded when Dejerric Bryant scored on a 22-yard run to cap a five-play, 75-yard drive with 3:18 remaining in the game to go up 20-13.

Jordan Hoy rallied his troops for a 14-play, 75-yard drive. He tied the game with a 2-yard plunge with 31 seconds remaining to send it into overtime.

The Delta Devils had a chance to tie or win the game after Giffen’s kick but Andre Mulinax sacked Bryant for a 14-yard loss to Lamar’s 40 on third down and Bryant’s pass on fourth down fell incomplete.

Hoy threw for 233 yards and rushed for 68 more and two scores.

Lamar’s win gave the Cardinals their first 2-0 start since the 1985 season when LU started the season 3-0.