Warren Central pulls away for eighth straight win over Vicksburg 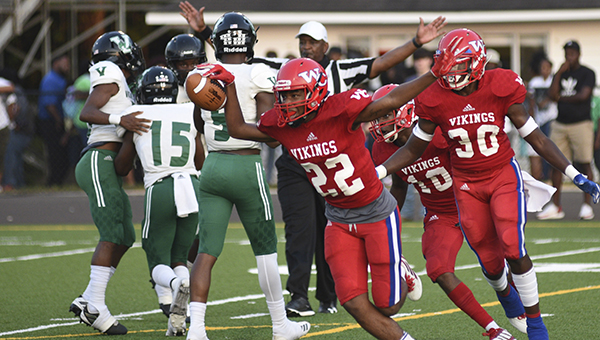 Warren Central's Jerry Evans (22) celebrates after recovering a blocked punt in the first quarter of Friday’s River City Rivalry game against Vicksburg. Warren Central scored a touchdown on the next play and went on to win 42-7. (Courtland Wells/The Vicksburg Post)

After a disastrous start, the Vicksburg Gators collected their wits and had an opportunity to dig out of the hole they’d made for themselves.

It quickly vanished, and soon Warren Central was running off into the distance as well.
Warren Central scored 28 unanswered points after Vicksburg had cut an early two-touchdown deficit in half, and went on to beat the Gators 42-7 in the annual River City Classic rivalry game at Viking Stadium.

Jerrious Stovall ran for a team-high 71 yards and a touchdown, and also caught a TD pass as the Vikings split up the offensive workload. They ran for 219 yards among nine different ball carriers. Five of them scored a touchdown.

The solid effort was a welcome turnaround for Warren Central (2-1) after it was blown out 42-0 by Pearl the previous week.

“We didn’t like that at all, and it was really crucial how we responded. We went back to work during the week and we were ready to get better. The guys did a good job of just responding in a good way,” Warren Central coach Josh Morgan said.

Vicksburg (1-2) was coming off a win over Velma Jackson, but ran into trouble right away. After going three-and-out on the game’s opening possession, Keveon Smith’s punt was blocked and Stovall scored on a 9-yard run on the next play.

Another three-and-out on the second series was followed by a Warren Central touchdown drive, capped by Malik Sims’ 6-yard run with 2:44 left in the first quarter that made it 14-0.

“Any time you can start fast it helps, especially in a game where emotions and everything are so high. We had some breaks go our way early,” Morgan said.

Vicksburg gathered itself from there and seemed ready to get back into the game. Its defense forced a three-and-out of its own, and with 9:25 left in the first quarter Smith tapped his feet down just in bounds in the back left corner of the end zone for an 8-yard TD pass from Sha’Kori Ragan.

That was followed by a Warren Central fumble on the next play that gave the Gators the ball right back at the WC 29-yard line.

Unfortunately for them, two plays later Rashad Flagg caught a short pass and lost control of the football while trying to make a cut. Warren Central fell on it and the momentum was gone.

The Vikings scored on a 25-yard run by Antonio Thompson later in the quarter and a 17-yard pass from Parker Kivett to Stovall with one second left to take a 28-7 lead into halftime.

The Gators committed two turnovers in the second half and finished with four in the game, and did not get past Warren Central’s 25-yard line in the last two quarters.
Ragan finished 13-of-23 passing for 91 yards, with one touchdown and three interceptions. Cedric Phillips carried the ball 16 times for 62 yards. The Gators finished with 170 yards of total offense.

“I think we let the emotion get too much to us,” Hughes said. “One bad thing happens and we decided it was the end of the world instead of going to the next play. Then we gained a little footing and realized we had to play a full game. By the time we came back at halftime it was in our body language that we weren’t ready to go.”

Kivett’s pass to Stovall capped a quick five-play drive to finish the first half. After getting the ball with 1:05 on the clock, Stovall carried three times for 25 yards and Kivett completed a 30-yard pass to Shayne Ragan to move it to the 17-yard line with seven seconds remaining.

Rather than try a field goal, they rolled the dice and went for the touchdown. Stovall snagged Kivett’s pass on his fingertips as he crossed the goal line.

“We were being careful with it and trying to see how much we could get, and then we got a long run and felt like we could get in to do some damage,” Morgan said. “We took two big shots and it came through for us. It was really good execution on our part. We pushed it dang close, didn’t we?”

After that, the Vikings were in firm control of the game. They opened the second half with an eight-play, 88-yard scoring drive capped by Jaevion Mims’ 2-yard run, and Kentrick Thompson added a 10-yard TD run midway through the third to finish the scoring.
Mims finished with 52 rushing yards on seven carries. Kivett was 9-of-10 passing for 136 yards, with one touchdown and no interceptions.

“It feels good. We had to shake back from last week because it was terrible last week,” Sims said. “We said forget it. We’ve got to stay humble and stay prepared to beat Vicksburg. We had to make it happen this week. We didn’t want to make Coach Josh sad.”